After enjoying a delicious dinner at the Blue Moon Bistro in Beaufort last night (who knew fried oysters in spicy Thai dipping sauce could be so good??) we returned to Equinox and poured over the latest weather forecasts that our Sirius Marine Wx system had received. We really wanted to make a short offshore passage to Charleston if the weather allowed. We each examined the frontal boundaries, impending high & low pressure systems and wind gradients, all with an eye on how Equinox would handle the prevailing conditions if the forecasts proved true. All 24- and 48- hour forecasts for the coasts of NC and SC were similarly favorable: NE winds, 10-15 kts, seas 2’-4’, with increasing winds 15-20 kts and seas building to 3-5’, before diminishing to 10-15 kts again. After some discussion of the very real probability of the weather being worse than forecast, we decided that with the winds at our stern and a following sea, we’d fare well. If the forecasts in the morning were worse than the night before, the plan for going offshore would be scrubbed.

Dawn arrived with light NE winds and few waves, and the extended outlook was for steady conditions until the weekend when a cold front and nasty-looking low would be moving in. So, offshore towards Charleston we went!! We watched the sun come up on the water looking silky smooth, and as the day progressed, we did get the forecasted 10-15 knots of wind, with the gentle swells gradually increasing in size to about 3’. With the following seas, Equinox got a little push, making 9 knots at times at less than usual cruising rpms, and we rode the swells easily, gently rocking up and over.

Our friends aboard Concrete Idea called about 9:30 to say we’d done the right thing in going offshore, as the ICW below Swansboro was closed! This was due to some “live firing exercises” by the Navy; they were shooting live rounds at their practice range near Onslow Bay, just offshore the ICW. We’d been hearing Warship 98 all morning, warning vessels to stay clear of her maneuvers, but we were well away from them, despite Karyn’s initial concern. (There were several large ships out participating in the exercises, so it was initially a bit confusing as to which ship was making the VHF announcements.) We are SO lucky we went offshore....not only are we making good time, at least we’re making time, period! 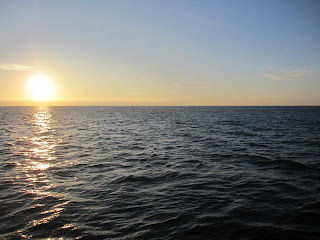 The sun rising to the east as we left Beaufort, NC

The clear early morning hours clouded over for a bit mid-day, then sporadic sunny breaks gave way to a full-on sunny afternoon. The best part of our gentle rolling ride was the dolphin escort we received most of the day! We had huge pods of spotted porpoises leaping and cavorting in our bow wave; we took photo after photo, hanging off the bow pulpit in delight as they rolled on their sides and peeked up at us as we peered down at them. I’m pretty sure they were actually having the most fun, but it wasn’t a contest!! Their acrobatics were thoroughly appreciated and enjoyed.

Ron of course wanted to fish, but much to his dismay, only caught a couple false albacore (easily released, much to their pleasure). I suspect we’ll get better fishing opportunities as we head down the coast from Charleston next week, if we’re able to do so! 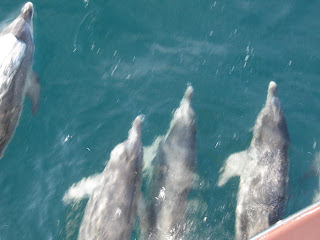 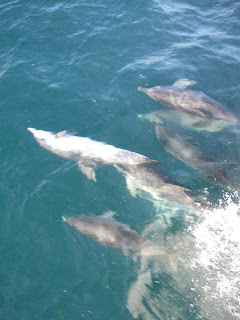 One dolphin rolling over to peek at us 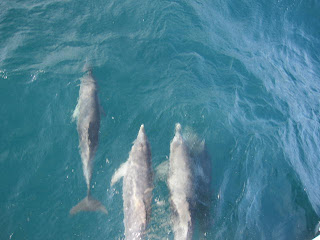 Right now the sun is hanging over the water to the west, as we’ve made the turn around Frying Pan Shoals at Cape Fear, NC. We’re sailing into the sunset, truly!! Ron is prepping dinner and Otto the autopilot is keeping us on heading for an early morning arrival in Charleston. The swells are now a bit more from the starboard quarter now, but all in all, still quite gentle and lovely. There’s another hour or so of sunset left, then the night watches begin...