The weather started out ugly this morning with 20-25 kt winds and a small craft advisory out until 2 p.m. We woke around 5 am, hearing rain pounding down on the foredeck and the lines of a nearby sailboat clanging away on the mast like an annoying drum. Usually I don’t mind the sing-song of sailboats, but this particular one had a tone that wasn’t exactly musical at that hour in the morning! We were leaving at first light, which wasn’t for another two hours, so sleep would have been welcome!

Because of the snotty forecast, only a few of us ventured out at daybreak, a couple of sailboats and three of the heavier trawlers. (Our flock!) Our friends aboard Concrete Idea, the Carver 56’, weren’t keen to get pounded in the 3-5’ waves that NOAA was predicting in the Pamlico and Neuse Rivers, so they didn’t leave with us, much to their dismay. 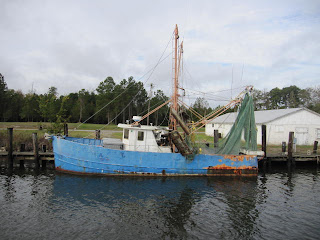 Shrimper boat on the way to Beaufort 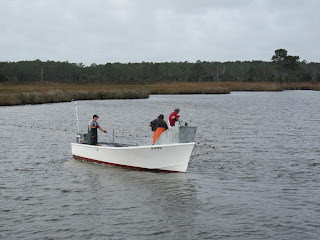 Fishermen netting fish just north of Beaufort
Yet, within a half hour of departure, the winds settled right down and it was lovely cruising! We were really happy with our decision to head out! Ron is really enjoying this cruise; it’s SO much better than getting beat up and tossed about on a rough offshore passage. We’re keeping an eye on the weather, nevertheless, because if it does improve, we would enjoy a smooth offshore run from Beaufort, too!

Concrete Idea came blasting by us about an hour out; once they saw the weather was clearing, they were kicking themselves for not leaving when we did. With the offshore forecast not looking favorable enough for their vessel, they were heading for Swansboro rather than stop with us in Beaufort as we are planning tonight.

We had some sunny breaks as we crossed our of the Hobucken area, but mostly it was gray as we came down the Neuse River. We’re cruising in the company of another KK 58', Solveig IV, who is slightly ahead of us, with our "flock: (Prima Donna and another trawler) trailing behind us. Prima Donna peeled off to head to Oriental, while we continued along south. The winds picked up as we came into Beaufort, NC (pronounced “Bo-fort”, as opposed to “Bue-fort”: Beaufort, SC) The best thing as we arrived into Beaufort is that the temperatures are noticeably warmer than they have been of late, so we're enjoying that. Yes!! 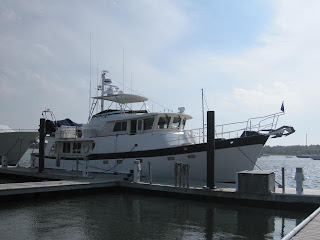 We’d timed everything right except....had a 20-minute wait at the Beaufort Bridge. (If we’d gone around, there’d be no waiting, but it was a longer route and we opted for the shorter route....didn’t save a darn lick of of time!) We docked at Beaufort Docks on the waterfront, wanting to hop on their free Wifi, but could never get on their signal. Still, we’d also received the well-known Docks tokens for free beer, so put them to use immediately, pausing to quaff a cold one on the deck overlooking the marina. Watching the sun on the water amongst the sailboats in the anchorage was delightful!

Beaufort is a lovely seaside town; Karyn had never been here before so enjoyed strolling around with Ron along Front Street. We stopped at the Post Office in an attempt to mail some large envelopes (they needed weighing, as we were unsure of the postage needed) but to our surprise, the Post Office was closed. The posted hours were 10:00-1:30!! Wow, bankers hours at the post office...who would have guessed?

Nevertheless, we enjoyed walking about the town, and came across Cru Wine Bar, where we had a yummy cheese plate and a glass of pinot noir (Russian River, of course, as a nod to our recent trip to CA). We strolled past lots of beautiful historic homes -- some dating back to the 1700s -- all carefully kept in charming neighborhoods that abut the downtown area. It’s all really pretty. There’s a lot of history here too; the maritime museum on Front Street has artifacts from Queen Anne’s Revenge -- Blackbeard’s ship that sank in 1718, and discovered in the shoals of Beaufort’s inlet in 1996. How cool is that?? Argh!! Pirates! 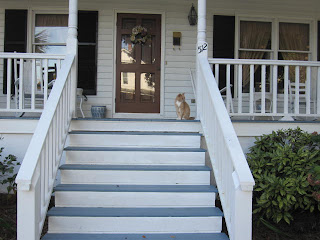 One of the many cute front porches -- with cat, of course.