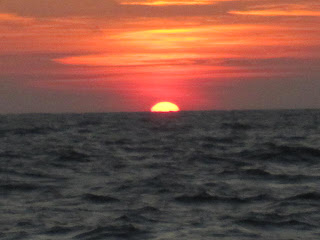 The sunset last night was unbelievable. Truly. That saying, "Red sky at night, sailors’ delight?” sure seemed true....we each had a fast 4-hour watch, with fair conditions. The following seas gave us such a push that we had to slow down to nearly 6 knots coming into Charleston Harbor, so as to arrive with some daylight. We both were up for arrival into Charleston, so as to have an extra set of eyes available in the early dawn darkness. There was a fair bit of tug traffic initially too, so we timed our entry into the channel in a break between all the big commercial ships heading into port. The Charleston Pilot boat passed us on its way in and hailed us, confirming that the channel would be clear for our entry, before recognizing Equinox as a Kadey-Krogen and complimenting her with “Beautiful boat”! Thanks, we think so, too!!

We docked at Charleston City Marina, at the Megadock about 8:00 right after they opened. We ate a lovely breakfast aboard in the PH: Ron made a great veggie-stuffed omelet which we split, and Karyn made the mimosas! Immediately after that, we crashed hard for a solid two hours, since we were both needing to re-charge a bit after our early morning endeavors of making landfall. Groggily we awoke mid-day, to walk about old town Charleston and enjoy the beauty of the place. We had a delicious late lunch at 82 Queen Street in their garden, then meandered back to the marina. 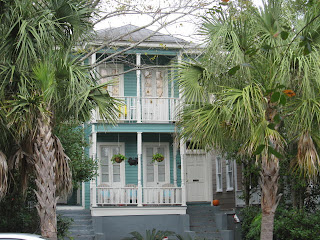 Ally arrived very late that evening, having flown in to Charleston despite many delays (going through Atlanta, where there was serious flooding). She is staying with her friend Annie for the weekend, so it was serendipity that we could be here at the same time!! Ally walked over to the City Marina on Saturday morning, and we enjoyed a few hours together before she helped us cast off lines yet again. She will stay in CHS to enjoy Halloween with her friends before flying back to school tomorrow afternoon. She said it didn’t seem fair having to stay behind on land, but, if all works out, we will see her again in just a few days down in Florida!