What a great dinner we had at Crabby’s last night!! We knew it was going to be good when the Midway Marina manager told us the restaurant wouldn’t open until 4:30 “because the ribs needed more time to cook”! Yum!! Worth every penny as the staff was a nice as could be, and yes, the food delicious.

Ron and I crashed early -- were out cold before 8:00 p.m.! But, on the plus side, we were up at 7:10, and underway at 7:30 am! Once out the gate, it was the usual jockeying for position, with the faster boats pushing their way forward (again, sometimes with an obnoxious wake) and the attendant snarky comments on the radio. Albemarle Sound was sloppy and choppy with 10-15 kt winds from the west, with a good layer of fog that limited visibility to around a quarter mile to a third of a mile. Not great, but definitely better than it would have been going offshore!! 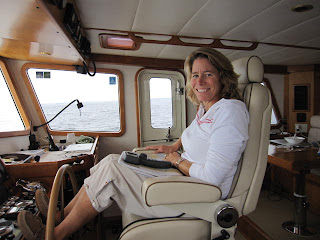 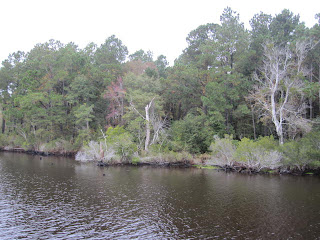 So, onward we pushed, leading our little flock of boats along like a mother duck...every time I looked back, we had a little flotilla in tow: a Fleming, Prima Donna, direclty behind us, and another little trawler behind them. There was only one bridge today, at the Alligator River, so no bottlenecks nor traffic issues. It was just a scenic, calm cruise through some of the most remote wildlife areas we've seen. I suppose on a warm summer blue sky day it would be prettier than it was today in late October under overcast, gray skies. Plus, we never did see any alligators, either!

By the time we reached the Pungo River, we were glad to be out of the canal, definitely time for a change of scenery!! The canal doesn't have much to catch your eye, but at least it's deep and free of snags in mid-channel...sometimes the ICW is a bit of a grind, in that you have to log a good number of miles in order to reach a decent anchorage or marina in unsettled weather. It was about this time we kept hearing our friends from Concrete Idea every so often on the radio, so knew they were catching up with us.( At 8 knots, we're not hard to catch, especially when they can go almost 25 knots if they choose!) We're both now tied up and secure at River Forest Marina, where we will spend the night.