Whirlwind before the calm...

....or so we hope!! The activity levels have been off the charts here, between prepping the boat to head south and getting the house tidy enough for the realtor to show (even though the house isn't officially listed yet). Between the boxes, packing paper and bubble wrap, and the handyman odd jobs getting completed (crown molding put in the dining room, master bath being renovated and re-tiled), the house was a disaster!!
So...after a big 3-hour push this morning, the boxes were consolidated in the garage, miscellaneous trash gathered and taken to the dump, and the rooms all vacuumed and dusted for showing. We have about 7/8 of our remaining things packed and prepped for the movers, but considering how much we've already donated, given away and/or gotten rid of, there isn't much left to pack, and all told, not really that many boxes in the garage either. Yay! Still, I have a couple of boxes worth of books and memorabilia odds & ends tucked into corners and cabinets that will have to be dealt with, but...later! :)
We're now aboard Equinox with Ally after she took the ACTs this morning, and watching the weather. It's pouring cats and dogs in Annapolis at the moment, raining so hard it's hard to see across the mooring field in front of the Naval Academy: 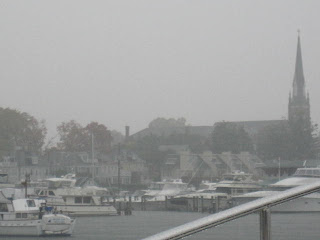 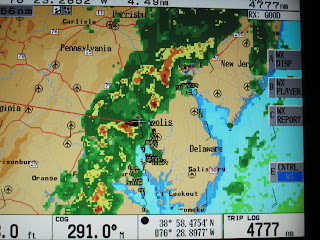 The radar shows the rain moving from the west
But it's beautiful to have it be raining now...we're snug aboard after getting the last of the provisioning done earlier this afternoon. The house boxes are packed and ready (for the most part), the house is presentable for showing (for the moment), the boat is fueled and ready (also for the moment) and all that remains is to watch for a weather window!! Ah...to actually sit down for a minute feels utterly fabulous! And, the weather window for the few days ahead is ... definitely improving! After Ally heads back to Oldfields, we'll be off, heading down the Bay to Norfolk, VA. Once there, we'll reassess the weather again, but if the current forecast holds true, we'll be heading offshore Monday sometime. Or...NOT! The weather will dictate our path!! Adventure awaits!!
Hugs to all, Karyn and Ron at 4:16 PM