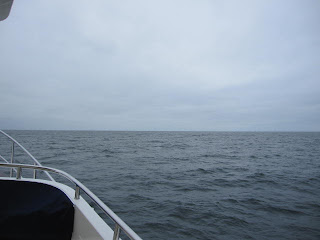 Today is a gray day, with sea and sky mirroring each other, although the water has more contrast and features in its slightly darker shade, with the wind wrinkling the waves. It was a long night last night from Charleston; the weather forecast was actually quite accurate: seas ranged from 2-4’, and as for the winds, for they did clock around from the south to the west and now are pushing us along quite nicely from the north, in a following sea. When the wind and waves were out of the west as we were approaching Jacksonville, we were taking the seas more head-on, causing Equinox to pitch as well as roll in the easterly swells. Definitely a more boisterous ride, which bounced us a bit.

Neither of us got great off-watch sleep; we each felt we were being tossed about a bit more than usual. When Karyn came up on watch at 0300 (0400 with the clocks changing back this weekend), we noticed our port stabilizer wasn’t pulling its fair share of the work, so we reset the system. Bingo!! That did the trick, and settled our our ride a bit. Nice to know what was going on with the fin, having taken the stabilizer class at TRAC! Nevertheless, it was hard going in the wee hours of the watch after less than satisfying sleep. The electronics all needed to be coordinated with the time change too, which made things a bit confusing. What time IS it, anyway? Time has no meaning at certain points on an offshore cruise...

Of course, that doesn’t mean we are totally without reference out here...we have Ravens radio on Sirius, and are eagerly awaiting today’s NFL game against the Denver Broncos. After a 3-0 start, we are now 3-3 and are slogging through a tough patch here, having played undefeated team after undefeated team, but, hey, we’re due for a win!! (And...win we did: 30-6!!) 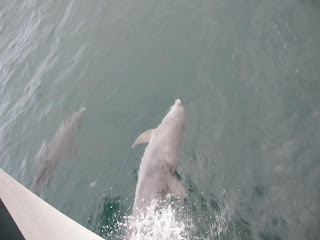 We still have our porpoise escort too...it's been almost continual all the way down the coast. Different pods come to join us, play in the bow wave, and cruise along with us....even in the dark hours, I can hear them splashing and coming up for air alongside the pilothouse. Its actually rather comforting; makes me feel happy and lucky that they enjoy being near us!