Well, the winds weren't too bad today, but the seas are still rocking and rolling on the reefs, so land-based attractions were the stars of the day. Ron and I took a good hour bike ride this morning while the girls enjoyed the sunshine at the Abaco Beach Resort pool. We biked out to Dundas Town, west of Marsh Harbour, along the main road. There were lots of pastel-colored homes, small businesses and take-away food stands, one of which I especially loved: the "God Bless Church Chicken: Sanctified and Fried" stand, which clearly must have the monopoly for fried chicken around here. Sure wish it had been open, but it was too early for chicken!

After we returned, we took the tender, Tingum, over to Hope Town to have lunch and explore a bit there. We'd heard about Elbow Cay's beauty, and were not disappointed!! The red & white striped Elbow Reef Lighthouse stands sentry at the entrance to Hope Town Harbour, a fixed (non-rotating) light of the first-order (of brightness) that warns ships away from the treacherous reef that extends quite a ways to seaward from Elbow Cay. For a bit of history about the lighthouse, it was built in 1863, and at the time, the idea of a lighthouse was not popular with many of the Hope Town locals, since many Abaconians made a good living from salvaging (locally known as "wracking") any ships that wrecked upon the dangerous shoals of this low archipelago of reefs, rocks, cays and white beaches. Aids to navigation weren't exactly welcome, since it would impact the wrackers' livelihood.

According to a history of the lighthouse by Hannah Solo and Neil Aberle :

"Merchant sail flourished between 1820 and 1880 and the Bahama Islands lay spread-out along its way. The Bahamian wracking fleet stood ready to help, with almost 300 vessels licensed to cruise the reefs in search of luckless ships to salvage, employing half of the able-bodied men in the country and accounting for about half of this British colony's revenue. The records for 1860 show an amazing average of one wreck per month at Abaco alone." 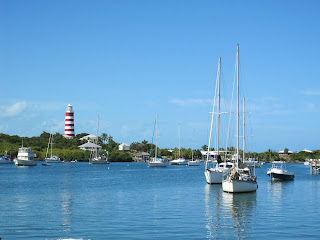 View of the Elbow Reef Lighthouse from the Dinghy dock
We tied up the tender at the Reef Bar & Grill at the Hopetown Lodge, and enjoyed delicious grilled grouper sandwiches and Caesar shrimp salad at the edge of the water. Good food, warm sunshine, beautiful scenery...fabulous! After lunch, we walked up the "Queen's Highway" and made our way through town, with its charming pastel cottages and white picket fences. Ally and Kayleigh have decided they want to live here some day, it enchanted them no end!! 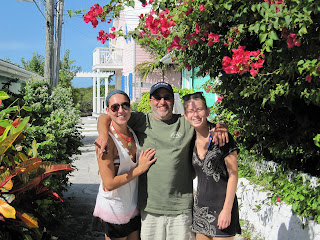 Walking about town together 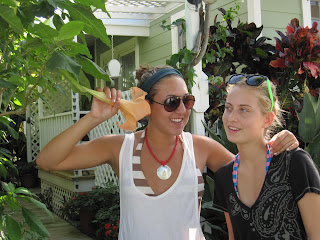 Ally and Kayleigh captivated with the Angel Trumpet tree 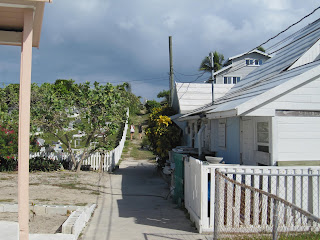 The girls running up the hill to the ocean overlook 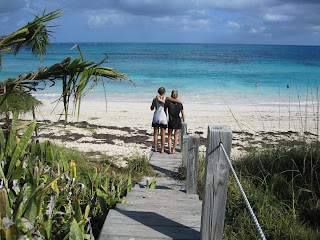 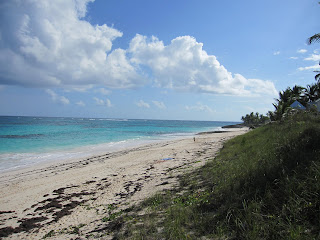 Absolutely breathtaking ocean views on Elbow Cay
After our exploratory walk about town, we took the tender out to the edge of the reef, as close as we could get without being tossed in the waves. We still were rocking and rolling quite a bit at times, but it didn't deter Ron and the girls from snorkeling and looking for lobster. Ron was impressed with the health of the reef here...but, oh, to have smooth water for a decent dive!! Not to be! 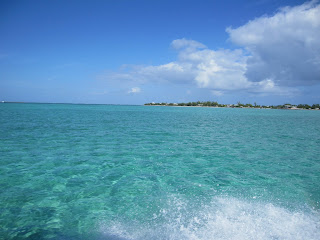 On the way to the reef to lobster -- turquoise waters indeed!
At the moment, everyone is napping, except for Karyn, in preparation for tonight's celebration. We'll be heading over to Snappa's for a late dinner and join in their New Year's Eve celebration. There's going to lots of fireworks, a "junkanoo rush", along with a band and dancing... Happy New Year to All! Hold fast to the good memories of 2009 and know that we wish you ALL THE BEST in the coming year.
Hugs to all, Karyn and Ron at 4:43 PM