“It was a dark and stormy night...” Actually, we had an amazingly beautiful sunset last night, kind of reminiscent of Maine, with the silhouette of the sea pines along the shore here -- and the extremely chilly temperatures!! The night was windy as hell, but the clear, bitterly cold night air made the stars starkly crisp and intense as I checked (at least 3 times) the anchor alarm setting. We’re tucked in tight at our anchorage here at Snake Cay and the anchor is holding well, but the winds are howling so much that I can’t help but stress about it a bit. It’s funny how the sounds of the wind and every slight groan or twang of the anchor chain makes its way into your dreams! Thus, the incessant checking of the anchor rode. But no, we’re dug in deep and not moving, despite the high winds. 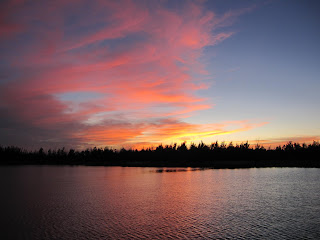 Could be the coast of Maine, with the temps we've been having...!
In the morning, despite my lack of sleep during the night, we were up early as we had an 8:30 appointment over at the Marsh Harbour Boat Yard. We needed to pull the tender out on a trailer so that we could do the 20-hour service on the Honda engines: a main engine oil & filter change and lower gear case oil change for both. After a cold and very bumpy ride to the Boat Yard, it was a treat to see that they were ready and awaiting us for our haul-out...probably because no one else was out in the high winds! As we worked on the oil changes, the wind was whistling and singing rather loudly in the rigging of the various sailboats blocked on the hard around us...so, kind of glad that we were low to the ground, in that wind! And, felt even more grateful that we weren’t the owner of the Moorings charter catamaran that was getting hauled out while we were there....someone had clearly mistreated it as its keels were definitely the worse for wear; the starboard keel was missing a good-sized chunk! Ouch! But it was being cradled and blocked with care, and soon to be tended to -- this is a decent boat yard! 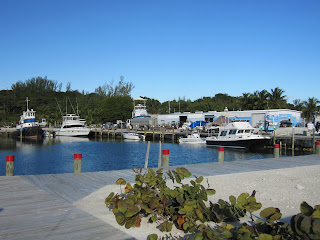 We finished with all the oil changes about an hour and a half later: lots of preparation helped, having the right tools, parts, and, to prevent any mess, we’d brought lots of oil rags, absorber mats and containers for the used oil. Ron was on top of it, I have to admit!! With the wind, the rags and mats were essential, as the gusts would somehow fling thin strands of oil everywhere. UGH! Once back in the water, the engines ran beautifully as we bumped our way lumpily home to the Equinox. Whitecaps and 4’ waves in the Sea of Abaco...kind of hard to believe how rough it is! 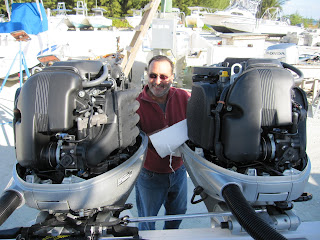 We showered gratefully, then relaxed in the afternoon, reading, doing crosswords and listening to the roaring of the wind as we rocked in our anchorage... there’s no sitting in the sun today, even on the aft cockpit, as there’s no escaping the wind today. Nevertheless....it’s beautiful looking out the windows, and we love where we are, love the boat we’re on, and very appreciative of what we have. Freezing or not, we’re still “living the dream!” And...loving it!