After some discussion, indecision and lethargy on our part, we hung out at Boat Harbour Marina for one more day. The winds weren’t as bad as the Cruisers’ Net made them out to be, although it was cold and gray most of the afternoon on Saturday. We had a quiet night aboard: we enjoyed a fabulous dinner with Ron’s delicious oven-baked-and-then-grilled baby back ribs, with salad and corn on the cob (quite the find here in the Abacos!), followed by a viewing of Star Trek. Totally relaxed, and enjoyable.

This morning Ron broke down the girls’ scuba gear, rinsed and hung up the BCs to dry before stowing the other dry items. Then, we took a long bike ride into town and down the main highway out of Marsh Harbour towards the airport...pretty quiet again, as it was Sunday, and most folks were in church. On the return, we made one last stop at the Price Right for red and green peppers (after a vain attempt to find the other grocery store in town -- Maxwell’s -- which we determined must have closed, as there was only a sign for it and nothing else). We’re now well-stocked in the pantry aboard the Equinox! 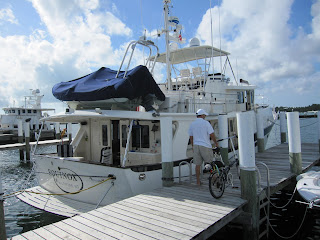 Once we got back to the boat, the winds were so light and the seas so calm, that we decided to head to an anchorage farther south. We could have stayed at the marina, but the transient rates at Boat Harbour are rather steep (unless you are staying 90 days or more) so it didn’t make sense to be running the meter when we weren’t really using the facilities, now that the girls are gone. So, Karyn helped Ron cast off the lines of Equinox, then stepped off the boat and followed in the tender. She ran out to our present anchorage, checked out the depths and the bottom (mostly sand and grass) and waited for Ron to catch up. We’re now 4 miles south of Boat Harbour, tucked into the lee of Great Abaco, on anchor along a quiet, undeveloped shoreline just north of Snake Cay. No one else is here, so we have the anchorage all to ourselves. Rather nice!! 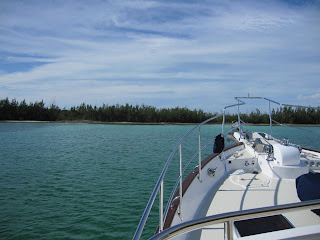 We watched the Miami-Steelers game on the satellite TV -- acquainting ourselves with our new “home” team -- although we were really waiting for the Ravens game to come on at 4:00. The Dolphins lost....but...with the Ravens winning, we are in the playoffs!!! (Too bad for Pittsburgh... but, not really....They get what they deserve, to quote ESPN: "a rare place in history as the incumbent Superbowl champions who were unable to even make the playoffs the following year." Couldn’t happen to a nicer team!)

So, under the waning gibbous moon, and the winds light and variable, the boat is lying peacefully at anchor. It’s a great start to 2010! We’re living the dream!!