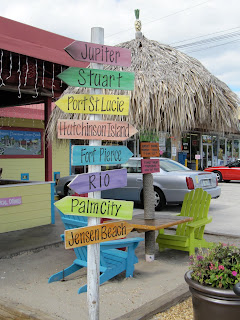 ...on the home front! Happily, while Karyn's been recuperating with Sandra at the condo, Ron is enjoying a bit of a well-deserved break after the intensive medical immersion of the past couple of weeks. Ron is down in the Keys, visiting aboard with some cruiser friends in Marathon -- even sparking a road trip to Key West with them, as our friends hadn't been there before. Sounds like Duvall Street delivered a bit of drink and apparently, a new tattoo for one of their crew, although Ron managed to escape unscathed himself! The drive down brought back lots of memories for Ron; he's been going there for so long, for so many years, that he really enjoyed his time there.
Karyn's been improving, slowly but steadily. The fatigue is less every day, and headaches are nearly non-existent with the help of Tylenol during the day. It's only been two weeks, so we're thinking it's a good thing that things seem so normal! Lots of follow-up scans and appointments loom on the horizon, but so far, neurological issues seem to be mostly theoretical, as there's been no blasting headaches, no unusual forgetfulness, no amnesia of recent events, no speech deficits. Of course, "normal" is a matter of perspective -- who's to say what's "normal", after all?? But combining lots of rest, naps and caution along with daily walks and exercise to increase stamina all seem to be helping out. No rushing things!
In the meantime, Karyn has been gaining strength enough to show Sandra a bit of Jensen Beach or Stuart each day, either by car or by foot. They've really enjoyed each other's company, whether hanging at the condo, or at the pool in the sunshine...all good! We went out to lunch at Mulligan's yesterday, as Karyn had to introduce Sandra to their signature Mahi-Mahi Rueben, which is delicious! We walked through the little galleries and art shops along Jensen Beach Boulevard before returning to the condo for more rest and recuperation...all in a day's work, so to speak! 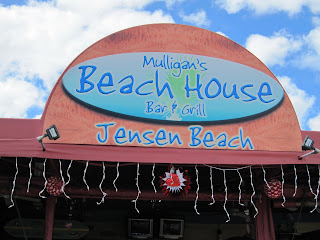 Other than that...we'll end with a moment for a safety broadcast! As is common on islands in the Caribbean, on many of the small Out-Islands of the Bahamas, golf carts and small scooters are typically used as vehicles. Many island roads and terrain can't accommodate vehicles much larger, let alone regular-sized cars or trucks. High-end resorts and gated communities alike use golf carts as transportation, and unfortunately, in many cases, golf cart accidents result in disabilities and/or fatalities. I made a lame attempt at humor regarding my accident (trying to diffuse the concern and worry among my family and friends) but now know I am truly one of the lucky ones to have come away from the accident without severe repercussions. This is fromThe New York Times, in June 2008:

"...The June issue of The American Journal of Preventive Medicine reports that injuries from being hit by or falling off of golf carts surged 132 percent from 1990 to 2006. Nearly 150,000 people, ranging in age from 2 months to 96 years, were hurt in golf cart accidents during that time.
One reason may be that golf carts have become much faster and more powerful. Reaching speeds of up to 25 miles per hour and traveling as far as 40 miles on a single battery charge, golf carts now offer quick travel in a variety of venues. They are now routinely used at sporting events, hospitals, airports, national parks, college campuses, businesses and military bases, the study authors noted. In some gated and retirement communities, golf carts have become the primary means of transportation.
But golf carts typically aren’t subject to federal regulations, and users often don’t even need a driver’s license to operate one. They don’t have seat belts or stability mechanisms, and a common injury involves people falling off, particularly from the back. In 1990 there were an estimated 5,772 golf cart injuries, but in 2006 that number had surged to 13,411. About 70 percent occurred at a sports or recreational facility. About 15 percent of injuries happened on the street, and those injuries were most likely to result in concussions and hospitalization. Another 15 percent occurred around homes or on a farm.
Nearly one-third of injuries involved children. About half of the injuries were related to falling or jumping from a golf cart or the cart overturning. Children were at highest risk for falls, and a fall was twice as likely to cause a head or neck injury.
Rear-facing golf seats, in particular, pose a high risk for falls. One study showed that golf carts traveling as slow as 11 m.p.h. can easily eject a passenger during a turn. Another problem is that golf carts don’t have brakes on all four wheels. Rear-wheel brakes can cause carts to fishtail and the driver to lose control, particularly on hilly terrain."

Yes, Karyn can confirm that about the ejection from the rear-facing seats -- and at slower speeds than 11 mph. So, if you use a golf cart: get in, sit down, be aware and above all: BE CAREFUL!! But enough of the pontificating: hugs to you all, as usual!!
Hugs to all, Karyn and Ron at 10:44 AM