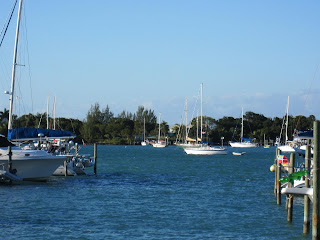 Ok, We’re about done here with the weather. I’d normally say we’re “toast”....but NO, we’re more like frozen waffles at the moment!! Along with the rest of North America, the Bahamas are having a “weather event” as they like to say...with the continued record lows and brutal northerly winds, the Bahamas are shivering in their sandals. We’re not happy campers....er, cruisers!! The Cruisers’ Net (VHF 68) was joking about “ice floes” in the Atlantic passages here today when they gave the passage reports, but....then again, thankfully we’re not in Omaha, NE with -30 below wind chill temperatures. It’s all relative!! No more whining from me, if I can help it...

Thus, today was mellow. Ron washed down the tender (my hero!) but he actually considered wearing his wet suit to do it, since the temps were so cold and the winds so cutting. The reality of getting wet while washing a boat in these winds wasn’t pretty. (I think of my dreamily warm coats that are currently just sitting in the closet at the FL condo...yep, the same ones I wondered why I even brought south. Sorry PETA, it’s time to wear FUR!!) But, no aboard...neoprene will have to suffice!

To avoid going stir-crazy, we took the tender over to Boat Harbour Marina, hugging the lee shore as much as we could. We went for a bit of late lunch and a cocktail (looking for a hot toddy, really, but no hot cider found here) before walking over to Mangoe’s to observe the winds whipping the main part of Marsh Harbour. Looking at the boats pinned to the docks by the wind and the others strung out taut on the mooring lines there, I felt very kindly towards our remote anchorage at Snake Cay. Not much around us there, but ... we are well-protected! I totally sympathized with the pair of dogs forlornly howling below decks aboard one of the boats at Mangoes Marina...they heard the winds howling in the rigging of the sailboats, and followed suit! (It was actually kind of funny, to hear the wind, and then the dogs....) :) 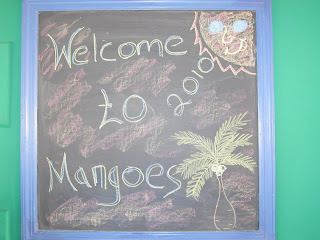 And, so...yet another day aboard. We’re missing Ally terribly, but Karyn will be heading back next weekend for her Senior Presentation, so that is a much-anticipated time together. Perhaps by then the “arctic airmass” will be gone from the east coast??
Hugs to all, Karyn and Ron at 10:03 PM