Exploring the islands of Eleuthera

A glorious day in Eleuthera. We totally enjoyed our first day here...the sun was blazing, the winds were light, and it was warm!! We took the bikes to shore after finding a place to tie up; there isn’t an obvious public dinghy dock, so getting ashore was a bit of a challenge. We later found out that most folks use the government house dock, but the Eleuthera Express was in (the ship comes in on Fridays) so the dock was crowded and full with people awaiting deliveries. We ended up tying up over at the Romora Bay Club, a beautiful, upscale resort on the south edge of Dunmore Town. From its hillside, we took photos of Equinox at anchor, framed by the palms and flowering bushes of the resort. It’s a gorgeous place! 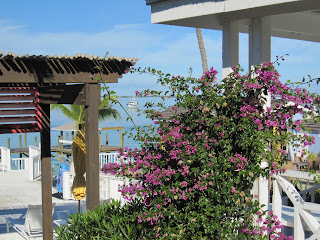 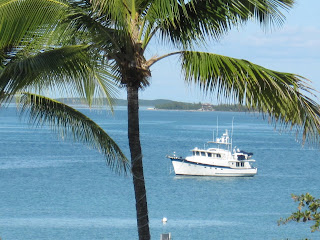 We biked all over Dunmore Town, up to the north end and then along its main streets, checking out the little cottages, businesses, inns and guest houses. After the flats of Abaco, Harbour Island is hilly!! It’s a bit reminiscent of Bermuda, with some of its’ architecture -- I later found out that Eleuthera was settled by some folks from Bermuda, so of course the homes would be similar. After locating the local grocery store, the Pigly Wigly (which cracked me up, having grown up with the Piggly Wiggly in Wisconsin), we also biked to the far east side of the island and checked out the beach. 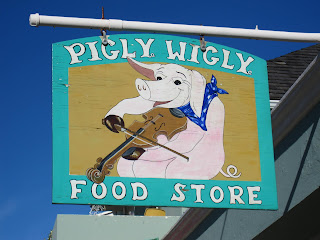 The one in Wisconsin doesn't play the violin 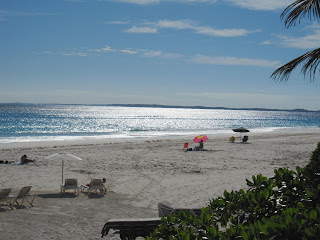 I can see why Harbour Island is so popular...its beach is absolutely stunning! The sand is a pale pink, and the waters a thousand shades of blue, from cobalt to aquamarine, from teal to turquoise...hard to describe adequately! After we explored on our bikes for an hour or so, we returned to the tender and decided to explore by water. We ran out “The Devil’s Backbone” -- a reef strewn passage along the north side of the islands that requires good light to see the reefs and rocks. Familiarity is a must before taking a deep draft vessel through there -- many boats hire a pilot to take them through it, but running it in the dinghy provided us firsthand knowledge ourselves. It’s definitely tricky, and a route you would only want to make in calm conditions! The route runs quite close to shore at points, so its a bit disconcerting, but the reefs are everywhere else! 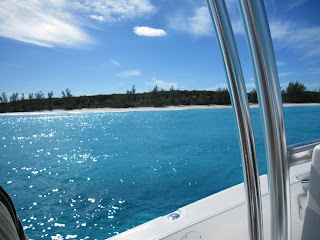 The northernmost edge of Eleuthera Island,
as seen from the Devil's Backbone 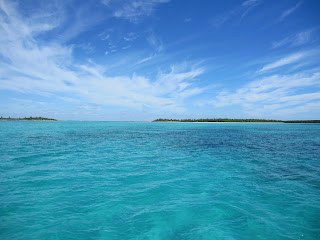 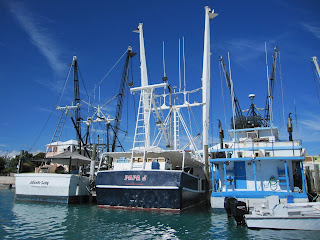 Part of the fishing fleet at Spanish Wells

We ran the tender all the way over to Royal Island, across just beautifully clear water -- again, all the amazing shades of blue that just took your breath away. We went to Royal Island with the intent to say hello to Tim aboard Pearl, but when we hailed him, a friend told us he was out on the reef snorkeling and lobstering. Royal Island is a totally protected little anchorage; there once was an elegant estate there, built in the 1950s, but is in ruins now. Supposedly, there are plans for some sort of upscale resort, but at the moment, it doesn’t look like much is going on. On our return, we stopped at Spanish Wells, where we got a spare bulb for the tender’s starboard running light, which needed replacement. The folks at the Marine store were very helpful, so we were on our way shortly after that small repair. We didn’t explore much of Spanish Wells, but instead headed out to the reefs of the Devil’s Backbone to do some snorkeling and lobstering ourselves. The reefs are GORGEOUS here...just snorkeling we saw all sorts of reef life, from a small green turtle to indigo hamlets, parrotfish, fairy basslets and juvenile yellowtail damselfish. (One of my favorites...the irridescent spots are so bright and pretty!) It was stunning.

After a week of being on the hook, Ron and I decided to be a bit decadent and take a slip at Romora Bay for the month. While it's a bit decadent to do so, it's very convenient in a lot of ways, including the security of knowing the boat, tender and bikes are being cared for when we're not around. The resort is gorgeous, very high-end, so the amenities are lovely, which we're not adverse to either! We've already met a lot of fun folks, including a pair of friends from Hawk's Cay Resort in the Keys, one of whom is a Hobart alumnus. Small world, as usual! We ended having dinner together before we went out dancing (until the wee hours) at one of the local hot spots, Gusty's -- a fun, late-starting spot, perched on a cliff with a sand dance floor. It was filled with Brilanders and visitors alike, and everyone was having a good time!! 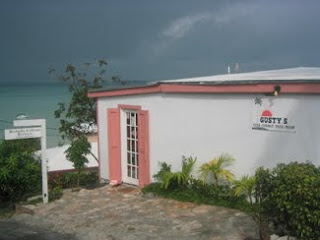