...which is exactly why we're here! We did both today, as Ron, Karyn and Paul made a very enjoyable scuba dive off the Great Abaco Reef just off Manjack Cay in the early morning. We were going to try a spot outside the reef, but the conditions were a tad rough with easterly swells that were rather large and rolling, so we opted to stay inside the reef. We tucked in just behind the reef line and dropped anchor in a large sandy patch, and dove from there, going through a notch in the reef to the deeper water. Visibility wasn't great, but the reef life was prolific and vibrant -- we saw everything from grouper to Caribbean reef sharks to incredible numbers of smaller juveniles along some of the prettiest reef structure around. Lots of healthy coral, sea fans, sea whips and sponges, with butterflyfish, damselfish, blue and brown chromis, sergeant-majors, blue tangs, parrotfish, grunts, coneys, rock hinds and snapper all swimming along the reef or tucked in amongst the coral crevices and holes. Paul saw a large lobster dancing about as well, although I didn't see it myself, being entranced with the schools of colorful wrasses streaming over the reef. We all enjoyed the dive and were delighted with the sea life!
After we returned from our dive, we picked up Kerry and Karen from Concrete Idea and cruised Tingum south to Elbow Cay, Abaco, for a visit to Hope Town. Of the six of us, only Ron and I had been here before, back in December when Allison and Kayleigh were with us. Elbow Cay is one of the many gorgeous small cays in the chain of barrier islands along the mainland of Abaco, and Hope Town is one of the prettiest settlements. Settled in 1785, many of its historical homes, monuments and public areas are still in use today. 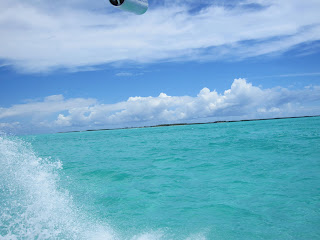 Turquoise waters of the Sea of Abaco en route to Hope Town
Hope Town is home to the Elbow Cay Lighthouse, completed in 1864, and one of the last manual lighthouses left in the world. It burns pressurized kerosene oil with a wick and mantle, and its Fresnel lenses concentrate the mantle light into a single bright light that is directed out towards horizon. Its light can be seen up to 17 miles away! Interestingly enough, the Elbow Cay Lighthouse's entire iron lantern room -- dome, petroleum burner, turning mechanism and the rotating Fresnel lenticular panels were brought to Hope Town in 1936 from its sister lighthouse on Gun Cay, Bimini, which was being closed down. Ron and I recently explored the decapitated remnants of the Gun Cay lighthouse back in early May, but I had no idea its top was sent to Hope Town! 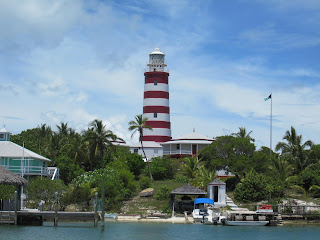 After a much-needed lunch of Mahi Reubens at Cap'n Jack's, we walked about the island reveling in the quiet charm of the cottages, homes and scenery. From the picket fences to the views of the water, there is always something to catch your eye! It's charming and beckoning...if we didn't have Equinox, I would be sorely tempted to vacation here! Check out some of the sights below: 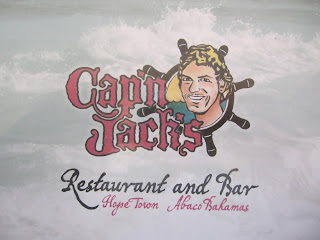 Where we had lunch after our cruise south in Tingum 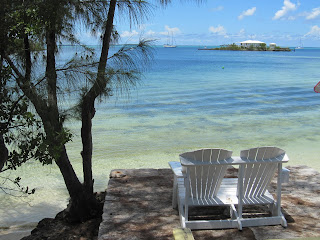 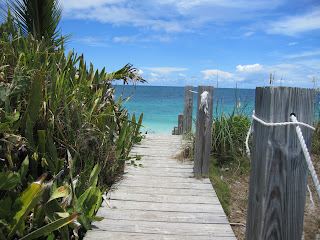 Access to the Atlantic beaches --  wouldn't mind this walk every day! 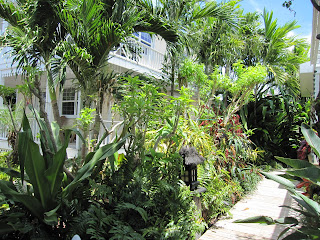 Along the lush landscape of Well Street.... 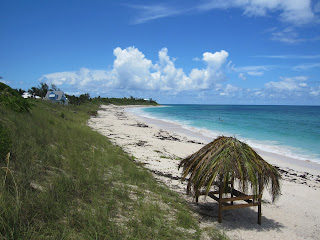 The beach on the Atlantic side of Elbow Cay 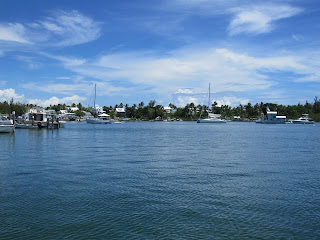 The Hope Town Harbor -- note the Stranded Naked houseboat
at the far right...our paths seem to be crossing at every juncture! 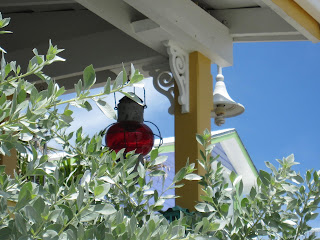 A sea lantern hangs on the porch of a Hope Town Cottage
Not sure what tonight brings, whether it's dinner aboard here or in New Plymouth, but as it's Paul and Muriel's last night with us, we'll let them decide. Stay tuned!
Hugs to all, Karyn and Ron at 6:03 PM