Start of the Return Journey 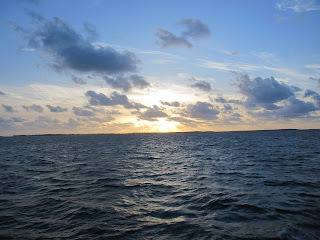 Dawn over Green Turtle & Manjack Cays after our departure

It feels odd to be heading back so soon -- I feel like we just arrived! But...we decided to make our way back a bit early, since the winds have picked up and diving here is less than optimal. We'll see what the weather has for crossing conditions in the next week or so! Thus, today we weighed anchor early about 6 a.m. and cruised to the northernmost area of the Abacos, to the anchorage at Wells Bay, just to the west of Grand Cay. To the east lies Walker’s Cay, the island with the well-known but now defunct/destroyed marina resort of the same name. First settled in 1911, it became a legendary resort hot-spot for fishing and diving for over 50 years.  Unfortunately, the hotel and marina were nearly completely destroyed in the hurricanes of 2004, and the resort was never rebuilt. In recent years, it only serves as a port of entry, and there are no other facilities or amenities available beyond a small airstrip. Boats head into the small settlement on Little Grand Cay, to Rosie's Place, if they need fuel,  food or lodging. 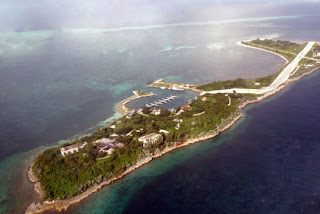 Walker's Cay as seen from the air...the empty marina
is all cordoned off and very desolate
We arrived at the Wells Bay anchorage just past high tide Friday afternoon, to find three other trawlers there: Aroha, Eagle and the Kadey-Krogen 48’ Whaleback, Fluke. It’s a large and gorgeous anchorage, with an idyllic, secluded beach on Grand Cay, ringed with numerous small, rocky shoals and tiny cays. We explored a bit in Tingum, before finally making our way into the settlement on Little Grand Cay, noted in our cruising guide as Grand Cays. Happily, Etta J’s harbor-side conch stand served up the best conch salad I’ve had in the Bahamas! Ron had the lobster salad, but I absolutely loved the spicy conch salad, since it was darn near perfect in its proportions of conch (nearly 95% conch, at least!) to onions, peppers and tomatoes. I did wonder the the “conch bubbly salad” was like -- and what makes it bubbly? -- but couldn’t resist the traditional recipe, which is my favorite! Unhappily, I'd forgotten my camera so I have no photos of the place! Augh!! We relaxed and watched the activity in the little marina and harbor area outside at Rosie’s Place before carefully navigating our way back to the anchorage. 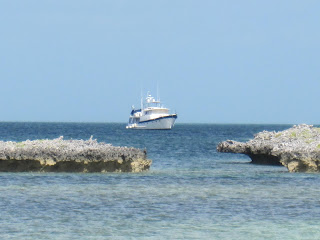 Equinox, on anchor, as seen from the beach on Grand Cay 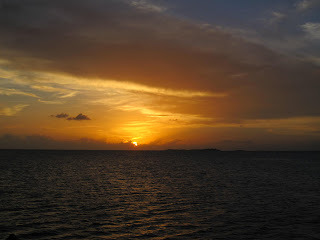 Sunset over Walker's Cay to the west
We had a quiet evening enjoying the solitude of Wells Bay, and were off early to bed after a light dinner. It was a fairly long day!
Hugs to all, Karyn and Ron at 11:10 PM