Rain and guess what? Wind!

Such a shock that it's windy...really, why would the weather calm down any, after the windy winter and spring we had? Oh well...you take what comes with Mother Nature!! It's actually not unexpected, since it follows the calm and lovely weather we enjoyed this last week, and which was very appreciated!! So, just equilibrium exerting itself, I suppose.

Anyway, Wednesday was gray and wet; Ron and Sammy made a valiant attempt at fishing while Karyn stayed aboard Equinox for some quiet time and domestic chores. Vaccuuming, doing laundry, even baking some bread while the guys were out hunter-gathering. Although I have to say I was more successful in my pursuits than they were...I at least had a tidy boat and a loaf of rye bread to show for my efforts, since the men got skunked at fishing. Still, Sammy directed Ron through some ins and outs (literally) of the reef at the north end of Great Guana Cay, following his "secret" route through the dizzying maze of reef and coral to get to the best anchoring spots for snorkeling and diving. They were rewarded with a gorgeous snorkeling spot at any rate!
Thursday was a dive day; we took Sammy out with us aboard Tingum, and armed with a hand-drawn map (which Sammy and Brent at Treasure Divers put together) we picked our way farther inside the reef and anchored near Blacktip Alley. While seas were pretty rough offshore, inside the reef it was much calmer and allowed us to anchor and dive easily. The area here is filled with gorgeous amounts of staghorn coral, overhangs and caverns, swim-throughs and little caves. Most of the larger tunnels and caverns were jam-packed with huge schools of silversides, shimmering in the stray shafts of sunlight penetrating the reef. Sammy showed us several of his favorite spots, and we each reveled in the choreography of the glittering schools of fish as they swirled and danced about us in the various swim-throughs. A very cool site indeed!! Unfortunately, we each only had one tank of air aboard, so after a leisurely dive at Blacktip Alley, we moved the boat and anchored a distance away at a site called The Cathedral, where we used our remaining air for a good half hour dive. Another good day on the water, and we returned to the boat in the late afternoon, tired, salty and happy! 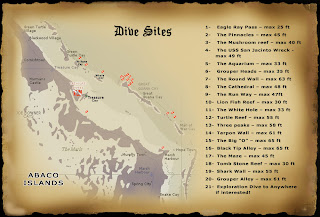 A map of Great Guana Cay dive sites from the
Treasure Divers web site
After the tanks were refilled and the boat washed down, we relaxed aboard Equinox and watched a parade of charter boats flock into the anchorage. It always strikes us as interesting how often in a wide, open anchorage with plenty of room, boats choose to anchor quite close to us. We figure that Equinox must look so salty and seaworthy, that we automatically exude an air of competence, so that others want to be nearby!! :) Either that or they want a wind break in the lee behind us...!


But as gorgeous as she is, Equinox is a heavy boat, nearly 100,000 lbs, and combined with her deep hull, she is often affected by the current as well as the wind. Thus, we anchor carefully, with plenty of rode out -- anywhere from a good 100', 120', to 140' or more of chain down depending on the depth of the anchorage. But, that also means our swinging radius is somewhat large, so we try to make sure we are well away from other boats. But while we are careful about this, it rarely seems to work the other way.... no sooner does a new boat enter the anchorage, and it chooses to blithely drop anchor just a few dozen yards away, with very little rode out. We've meet a lot of folks that way though, as the boats inevitably swing and things sometimes get a bit close for comfort...! OH well! Can't do a thing about it but laugh. Yep, cruising is always an adventure, even on anchor! 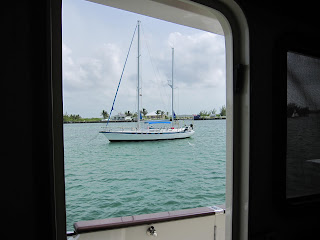 As seen from our galley door, this boat anchored just
under 100 feet from us, well within our swinging arc.
Hugs to all, Karyn and Ron at 1:14 AM