Ron and I did three dives today...on only one tank apiece! Ok, so we were simply investigating and wanted to check out the reef profile off Great Guana Cay. I'll admit a couple of the dives were short! The first dive was just outside Loggerhead Channel, and despite the promising sonar profile, the bottom was just scoured rock with a bit of coral around the edges of a sandy bowl. We were just about to turn back when, under a ledge alongside the sand, I saw the tail of a nurse shark, just chilling in the sand. The tail continued, and continued until we saw its wide body...it was a good ten feet, if not twelve!! While nurse sharks are generally known to be benign, I wasn't taking any chances when the shark is larger than you are! According to National Geographic: "Nurse sharks are slow-moving bottom-dwellers and are, for the most part, harmless to humans. However, they can be huge—up to 14 feet—and have very strong jaws filled with thousands of tiny, serrated teeth, and will bite defensively if stepped on or bothered by divers who assume they’re docile." Thus....I don't assume anything! :)
The second dive site was a bit more promising, with more coral and reef fish than the first site, yet...it was still kind of nondescript. After the dive, we hung out while on anchor and ate the picnic lunch we had packed, simply enjoying the calm seas, gorgeous scenery and the solitude.  And, since we were on the east side of Great Guana, Ron thought it would be fun to pull up to Nipper's! So, I sat in the bow of the boat checking for random coral heads and shallow reefs as we meandered our way inshore. We used a small stern anchor to keep us off the shallow reef to out port, then swam in to enjoy the solitude of the beach and bar on a Monday! 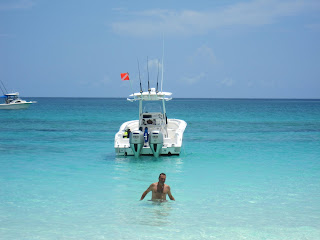 Ron wading in to the beach at Great Guana Cay 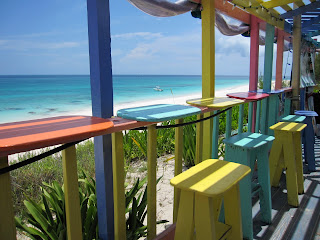 Nipper's on Monday...seats for all! 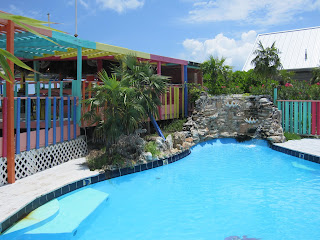 The pool was cool, inviting...and private!
The third dive of the day was the best, although it almost didn't happen. Ron was reluctant to switch over our gear to use one of last Nitrox tanks, so after some discussion, we decided to simply use the remaining air in our original tanks. and went in with enough for a short 20-minute dive. But sure enough...lots to see! Right off the bat, I saw a Spotted Drum tucked under a corner of coral, and before I could spend a moment appreciating it, Ron motioned for me to follow him through a small swim-through. Once inside, there was a large green moray face-to-face with us, a bit perturbed that we disturbed him. Nice to see a moray here though...first for the month!
After the dive, we surfaced to find the afternoon storm clouds coalescing for some rain. We raced Tingum back to Equinox, but...the rain won! No problem, mon....nice washdown in the warm air! The was so much rain in fact, that horizon to horizon was a white-out, and you couldn't see land. But being the Bahamas, the rain comes, the rain goes, and shortly thereafter we had a rainbow that was stapled to the sky from horizon to horizon!! Gorgeous! Nice accompaniment to the usual post-dive chores of washing down the dive gear, washing off Tingum, filling the tanks and starting a load of laundry to clean the wet towels, swim suits and long-sleeved sun protection factor shirts! Dinner was a roasted chicken with root veggies and sauteed spinach while watching the gorgeous sunset to the west. Just another day aboard Equinox, although I'm fairly certain the agenda will be repeated tomorrow. The dinner menu will probably change though!
Hugs to all, Karyn and Ron at 8:18 PM