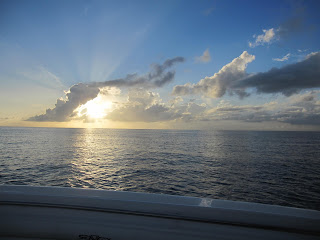 Dawn over the Atlantic near Green Turtle Cay

So...we've been busy since we took Paul and Muriel to the ferry dock in Treasure Cay on Wednesday afternoon. Sadly, their time with us was over, so they reluctantly returned to reality and returned to the States. It was hard to see them go, as we had a delightful visit with them! As always, the time together went too fast! Since then, thanks to the improving weather, we've been fishing with Karen and Kerry off Concrete Idea the past couple of mornings, then Ron and I have been diving in the afternoon before dinner and a movie aboard Equinox, again with K & K. Not a bad schedule, in my book!
Plus, the fishing has been great! We've gone out the past couple of mornings, trolling outside the reef east of Green Turtle Cay and happily, we continue to find the fish! We landed four good-sized Blackfin tuna Thursday, but really should have had six ... although it was no fault of our own, as the two that got away were really taken away, since sharks got them. When the sharks hit, all we ended up with was the fish heads, which was kind of disgusting! But the tuna we did get was delicious!! Ron and Kerry did have an encounter with a very large mahi-mahi, but unfortunately, that too got away before they could get it to the boat. At least the sharks didn't get that one!! 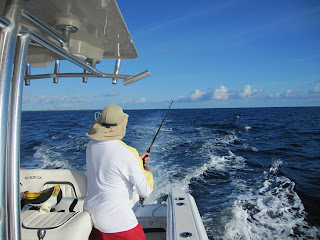 Ron letting out some line for trolling off Tingum 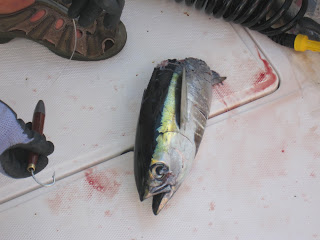 The remnants of a small blackfin tuna. The sharks
have been enjoying their share of our fish! 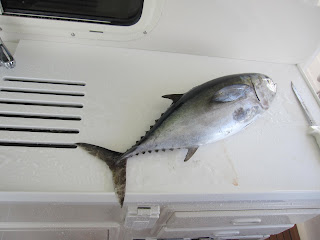 A better sized tuna, ready for processing
The diving has also been enjoyable, as we've been exploring the reef's edge near Manjack and Green Turtle Cays. We were going to try an area a bit deeper yesterday, near where we were fishing, but thinking about the fish we lost to sharks in that area gave us pause! We ended up in a shallower area, 45' or so, much closer inshore and found the reef filled with gorgeous pinnacles and coral structures that were amazing. Lots of elkhorn coral here, and prolific fish life. Happily too, we've not seen any lionfish here. An added treat is the warmth of the waters...it's been 82-83 degrees on most dives, enabling us to dive for over an hour at a time without getting chilled. It's lovely! At the end of yesterday's dive we saw two eagle rays feeding, just sailing around beneath us as we finished our safety stop near the boat. We both love seeing those majestic creatures!!
Today's dive was farther north, near Spanish Cay, with slightly different topography of more tongue and groove coral formations. Still a great dive, as we saw lots of good-sized snapper, grouper, a large porcupine pufferfish, among others. Towards the end of the dive we came across an utterly huge nurse shark, just hanging out on the sand between two tongues of coral. It had to be a good six to seven feet long, with an enormous head, and wasn't even under an overhang as they usually are. It didn't sit around long though, and moved off after we had a good look! As always, fun to see! Hopefully, the calm seas will continue for the next few days; we're looking forward to more dives, and if the visibility is good, Ron will do some underwater photography as well. Can't wait!
Hugs to all, Karyn and Ron at 6:08 PM