Landfall In the Abacos!

We cruised through the night across the Little Bahamas Bank, watching the spectacular light show of lightning that was glimmering on the horizon around us. The clouds seemed so close, yet radar continued to insist that the isolated squalls were miles away! And, in fact, we never saw a drop of rain nor heard more than a faint rumble of thunder now and again, but it was beautiful. After we women took our turn on watch, the guys took over and piloted until just before dawn. The sun rise over the water was just as pretty as the moon rise last night! 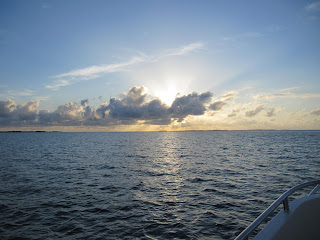 Dawn over Big Hog Cay in the northern Abacos 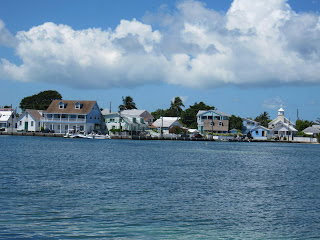 New Plymouth from the town harbor
We anchored just outside the entrance to New Plymouth, Green Turtle Cay, where Ron went to the Customs office to get us all cleared in. Always a fun time, dealing with the bureaucratic end of things, but worth it to be here! Once cleared in and the Bahamian courtesy flying above Equinox, we went into town for lunch and a walk. Lunch was fabulous grilled grouper at Miss Emily's, home of the "world famous" Goombay Smash, (which were also sampled!) A great introduction for Paul and Muriel to New Plymouth! 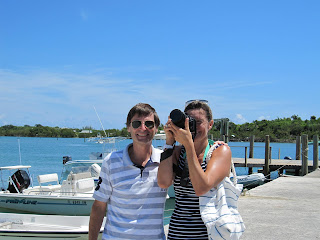 What Paul and Muriel do on vacation 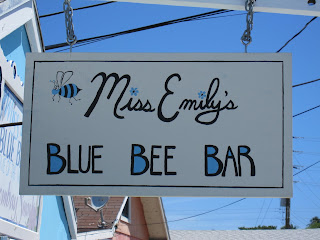 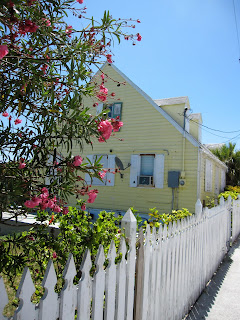 Self- explanatory!                          One of the tidy little homes in New Plymouth
After lunch we were joined by our friends off Concrete Idea, and the six of us went out to the reef in Tingum for some snorkeling, swimming and diving before the afternoon storms rolled through. As is the norm, the weather is quite humid this time of year, so isolated afternoon thunderstorms are commonplace. They don't last long, though, and after a brief downpour, the clouds move on and the sun returns. We returned to Equinox, and after time for some needed siestas, we grilled and feasted aboard for dinner. Fun stories and laughter abounded, although we all made it an early night after such an active day.
Hugs to all, Karyn and Ron at 1:01 AM