We moved north from Treasure Cay today, seeing as the weather is forecast to continue its windy trend. With ESE winds 15-20 kts and “puffing higher” according to Barometer Bob, with snotty 2-3’ rollers on the Sea of Abaco, and 4-6’ outside on the Atlantic.  We left about an hour before the stand of the higher high tide this morning, and had quite a luxurious bit of water under the hull -- more than 3’ higher than normal!
I ran ahead in Tingum, and Ron piloted Equinox heading for Whale Cay Cut. Since I was in Tingum, I stayed on the inside Sea of Abaco, and went through the Don’t Rock passage since seas were so rough. Ron surprised me though, and asked for depth soundings through Don’t Rock, which is known to be notoriously thin in spots. I was a bit startled to think he’d consider taking Equinox through, because of that! But...I then ran Tingum back and forth through the shallows of Don’t Rock, and each time I ran Tingum through it (three times) to double-check  the  shallowest water, I found that there was eight feet or more throughout! SO...with Tingum leading the way and taking careful soundings, Equinox followed, and we went through Don’t Rock passage uneventfully. Not exactly orthodox, but with the high high tide water, easily done! It saved Equinox from a riotous ride around Whale Cay, and cut a good hour off the passage as well. 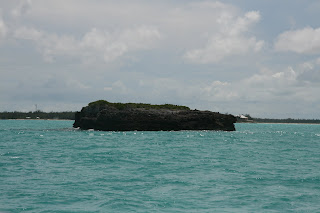 Don't Rock, as seen on a calmer day last week
So, here we are, anchored off New Plymouth on Green Turtle Cay once again. After the Don’t Rock passage, I pulled into White Sound to check if there was availability at the Green Turtle Club Marina as Ron was toying with the idea of actually taking a slip for a night, and as I approached the marina, I was startled by its emptiness....to the point I thought it was closed for some odd reason!! The north dock was entirely empty and there were only 4 boats on the south pier...but Wesley, one of GT Club dockhands, assured me that they were indeed open, it was just a slow time and therefore quiet. Even the anchorage in White Sound was empty but for a couple of sailboats and one trawler -- quiet indeed!
And, quite the contrast to our earlier visit here at the beginning of the month when it was Regatta Time In Abaco when marinas were full, and  the anchorages were packed. Currently, we are one of just 6 boats off New Plymouth, and to the north, there is nothing but the sunset over the Sea of Abaco. The sunset and sea views are expansive and private, with solitude our neighbor. Precisely what cruising is about! 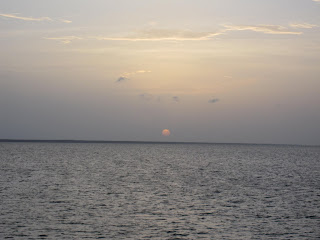 Sunset, looking west from our anchorage, over the Sea of Abaco
Hugs to all, Karyn and Ron at 8:18 PM