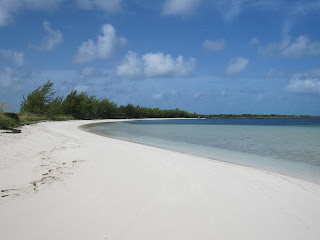 Wells Bay is gorgeous!! We are really excited to explore here, being so close to the renown dive sites at Walker's Cay. Unfortunately the winds continue to blow annoyingly, and the forecast is .... unchanging. Just more of the same! It’s predicted to be continual 15-20 knot winds, with seas offshore 3’-5’ throughout the next five days. We attempted to get out to dive early, before the wind picked up too much, so threaded our way through the reef past Tom Brown’s Cay and Seal Cay, where we anchored in the sand in about 40 feet of water. The visibility was terrible, which was to be expected since the seas have been so stirred up, but the reef life was nice. There were two good sized snapper that were initially wary, but then chose to accompany us around the reef. We had a young nurse shark eagerly approach us too, before abruptly stopping, (and squinting at us, I swear! Do nurse sharks have poor vision?) then immediately turning off and swimming away. The sharks here are more aggressive than most, due to the spear fishing along the small rocks and unnamed cays as well as the former shark feeds the dive shop at Walker’s Cay used to offer. We only stayed down a short time; the limited visibility and the small bit of reef wasn’t that all exciting, nurse shark notwithstanding. If the seas hadn’t been so rough, we might have gone out farther to find the better dive sites listed in the cruising guide, but it wasn’t a comfortable option. 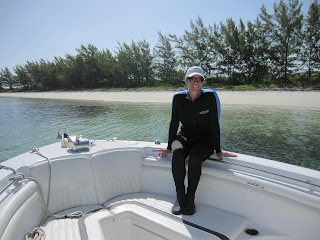 Karyn, post-dive, ready to explore the beach
We stopped by the beach and did a bit of exploring there after the dive. The beach is utterly gorgeous, scattered with a few pearly pink conch shells, as well as empty sea urchin shells, striped green and white. I had no idea what they were at first; didn't know sea urchins even had shells! Ron and I walked and enjoyed the solitude, and while we walked for a good stretch, we barely made a dent in covering the immense length of beach. We met the folks off Aroha, Jack and Anne, who were bringing their dog to shore and chatted with them for a bit. They've been coming to Wells Bay for years and really enjoy it. I can see why! 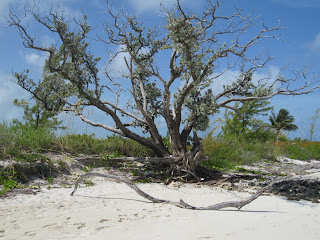 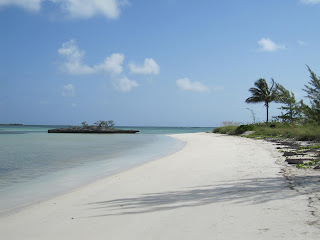 After our walk, we stopped by Fluke to meet the other Kadey-Krogen owners, Wayne and Carol, and their friend Eddie. We had a nice chat introducing ourselves, culminating with an invitationto join us for sundowners in the evening. We spent the afternoon trying our hands at spearing fish  -- which just was not happening for Ron -- the grouper and snapper were way too wary and when the nurse sharks started coming around asserting their territorial rights, we left. Carol, Wayne and Eddie are avid spear-fishers; they gave us tips and tactics about spear-handling and approaching the fish, which Ron is now eager to try. An example of a typical cruising pleasure, meeting interesting people in exotic locations! We'll see what tomorrow will bring on the fishing front!
Hugs to all, Karyn and Ron at 12:33 AM