A Day on the Water!

We got a reprieve today, thinking it was going to be more of the same gray rainy weather, but instead, we awoke to a warm, gorgeous day with light winds. What a treat!! We fueled the tender and headed southeast along the coast of Eleuthera, where we fished (or, attempted to fish --- clearly they were laughing at us as we caught nothing)  and trolled several hours away. We simply enjoyed the serenity of being out on the water...I for one, was mesmerized by the innumerable amazing shades of blue sea meeting blue sky with only the barest wisps of clouds on the horizon. It was gorgeous!! 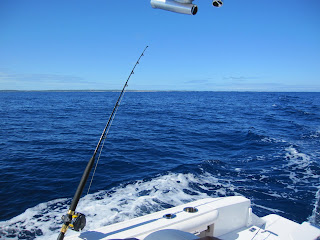 We went a good ten miles down along the Eleuthera coast, until mid-afternoon when we stopped fishing for a bit, to go in closer along the shoreline to find some potential lobstering spots along the reefs inshore. We used the glass bottom bucket to check out a few likely places, and then, finding a good sandy spot to drop anchor near some prospective reefs, Ron donned his scuba gear and went out to check out the dive site. He was on a reconnaissance mission, hoping that there might be ledges or holes that would be lucrative later in snorkeling and spearing lobster. Usually, if Ron doesn't find lobster right away, he wants to immediately look elsewhere, but today....his bubble trail went far and wide. I couldn't tell if he was finding lobster, finding none, or just meandering around. Forty minutes later, when he finally surfaced, he was raving about the beauty of the dive site! He'd actually not seen any lobster, but was so enjoying the prolific reef and vibrant sea life, he simply spent his time luxuriating in the dive. As Ron said, he's done a lot of diving all over the world, and this was one of the most amazing dive sites he's seen.
We put the lines in the water once again on the way back to Harbour Island, but ... true to form, we didn't land a thing, despite having two of our lures taken. Oh well!! We tried! Ron and I will be going out some time soon with one of the locals, known for his fishing prowess, in order to learn a bit more about fishing from the center console. Clearly, we need it!! 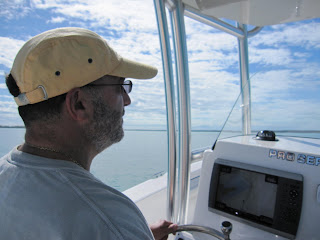 Ron happily heading back after a great dive!
Hugs to all, Karyn and Ron at 8:40 PM