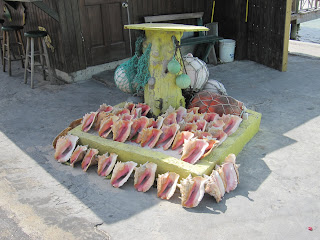 Pink and pearly conch shells on display in Dunmore Town
We awoke to a bit less wind and a bit more sunshine today...hooray! We indulged in a leisurely morning, with Captain/Chef Ron spoiling me yet again with an unbelievably delicious lobster-veggie omelet as part of our "Valentine's Day champagne brunch". We chatted on the docks with some of the other cruisers afterwards, all sharing stories of the wicked winds we suffered the other night: tales of bowlines snapping, seat cushions blown away, descriptions of forays out in the rain and high winds to wrestle on additional lines for safe-keeping, etc. While it was a hard night for all, it seems like we had it relatively easy, compared to some of the boats that received a pounding out on the more exposed piers! You never can tell! 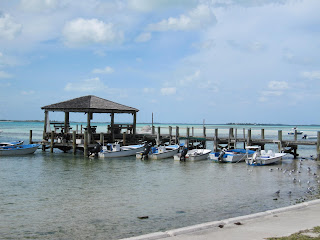 The fishermen's pier, near low tide, as we cycled into town
We took a relaxed bicycle ride into town, heading into town with the faint hope that the Piggly Wiggly might be open on Sunday, as we needed a few pantry items: eggs, lemons, limes, and potatoes. Brilanders seem to be devout church-going folk, so it was no surprise that most stores were closed, with the exception of a very few. We did find a fruit & vegetable stand on Bay Street that had the majority of things we needed, so we purchased those and stocked up on some fruit as well, before venturing to yet another store to find the eggs. 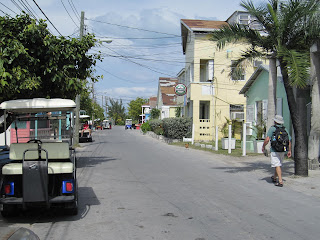 Empty street on a quiet Sunday 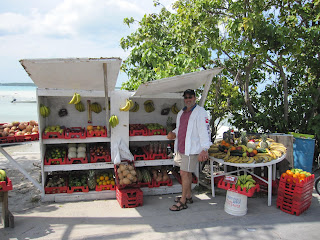 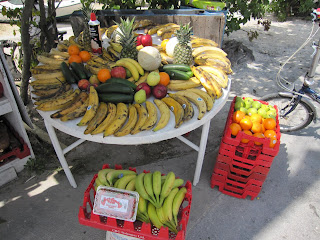 A sampling of their wares 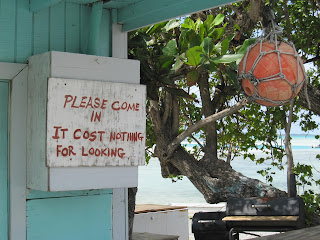 A sign on a nearby straw market stand
We meandered along on the back streets, eventually returning to Romora Bay, where we spent the remainder of the mellow afternoon. We spent some time rinsing off the boat -- it desperately needed a good bath after the salty rime that totally encrusted the rails and brightwork during the last few days. We also spoke with Ally a few times via Skype, who was en-route back to Maryland at long last. It's a good thing she's finally able to fly back, as yet another snow storm is predicted to bear down on the eastern seaboard tomorrow night. What crazy weather!!
The remainder of the evening was quiet; we spent some time at Sunsets, listening and dancing to the fun reggae and "rake & scrape" of the Brilanders, as well as chatting with some of the folks that were here this weekend for a wedding on Pink Beach. We eventually walked over to Acquapazza, a gorgeous Italian/Mediterranean restaurant "down-island" for a late dinne, That too was great fun, as by chance, we met up with a captain from a boat at Valentine's whom we'd met on the ferry ride back to Equinox a few days earlier. We ended up trading all sorts of stories of boating, diving, lobstering and travel, and generally enjoyed ourselves. It shouldn't surprise me when we run into folks we know here, since the island is so small, but it always catches me off guard a little. Always fun! And, as they say, "it's better in the Bahamas"! We have to agree -- it was a great Valentine's Day!
Hugs to all, Karyn and Ron at 2:36 AM