..from the gray and rainy day today that was in the forecast. On the bright side, at least it's still somewhat calm, although higher winds are supposed to blow through late tonight from our favorite (ahem!) direction, the northwest. Once again, we'll get slapped around in the slip most likely...! Why is it the nasty winds come in the middle of the night??
Today was gray and gloomy, kind of all the way around. I'd not slept well, to be honest, feeling a bit worn and a tad dizzy at times yesterday evening, perhaps from the long day on the water, so I wasn't up early. Ron, of course, was the early bird, and had spent the morning pulling out all his assorted underwater camera gear. When I came into the galley for my coffee, he was in the salon working with the underwater housing assemblies, getting the different cameras installed, checking the strobe light arms,  and .... nothing was working out. (Ron traditionally does not have the best of luck when it comes to getting his cameras and underwater housings to work without a lot of hassle, for it never fails there is some missing or broken piece that needs replacement.) Since this particular video camera, housing and lights are new, Ron's had a day of frustration: piecing everything all together, checking with the instruction manual (as a last resort, mind you -- he'd prefer not to read the instructions), hitting snags and setbacks, such as  discovering the special rechargeable batteries for the underwater lights won't recharge. He's not a happy camper at the moment!! But, the more he plays with the new video camera, the more features he's discovering and getting comfortable with, and the more excited he is about using it! It will be a nice addition to our scuba dives! 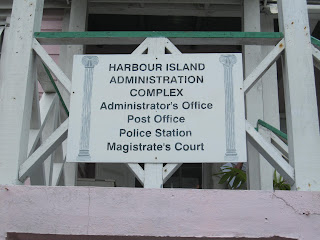 We did get out on the bikes, briefly, in the late morning before the rain started. We went to the post office (after finally finding it!) -- located upstairs in the pink Harbour Island Administration Complex building, on the aptly named Gaol Street -- to send out some mail. We also stopped at the hardware store in hopes of finding a hose to replace the one that broke its fitting; a new shipment of hoses were to come in on the "Florida supply ship". Unfortunately, the Florida supply ship was late, and hadn't arrived yet, so...no hose. We also looked at some fishing tackle and other items of interest before heading down the road to the liquor store to restock on the vital fluids (vodka and wine). From there, it was to the Pigly Wigly for the perishables: fresh veggies and dairy products. We don't buy a lot at one time, since we need to use what we have before it goes bad, thus have to restock the vegetables when we can. On the other hand, we've doing some "freezer diving", to effectively use our provisioned items (meats, in particular) for dinners, plus I've been baking bread aboard. It's always a treat to have fresh bread for picnic sandwiches when we're out on the boat!


Ron made another delicious dinner this evening before we battened down the tender and Equinox in preparation for the storm that is threatening later tonight. I can hear the thunder rumbling in the distance, and see the lightning that's flashing occasionally, although the rain and the wind have yet to start. Judging from the radar, we're likely to get quite a storm, which I'm not exactly looking forward to, in all honesty. But...Mother Nature can't be controlled, so we'll just rock and roll with the waves and the wind, whenever the storm arrives!
Hugs to all, Karyn and Ron at 8:22 PM