So what else is new?

Clearly, not much!! Like the rest of Florida and the Bahamas, we're really getting tired of these cold fronts moving through every few days. Last night was again a rough one: we had sustained 35 kt winds out of the northwest, gusting near 40 kts, along with a very high tide, so the boat was pitching, rocking and rolling every which way in the slip. Thankfully, we'd already added extra lines after the first cold front we'd endured here, so we were spider-webbed in the slip quite carefully. 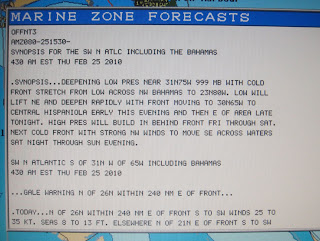 0430 am NOAA weather forecast for Thursday:
gale warning and more ugly weather ahead


Nevertheless...with the winds, sleep wasn't exactly in the equation, so we were up in the night checking lines, checking clearance between the boat and the dock and pilings, watching the wind indicator rise. Around 4:00 a.m., we found ourselves in the pilot house in the midst of the heavy winds, watching while some sailors tried to add extra lines to their catamaran in one of the outer slips. Turns out the marina security guy, Kenny, had urged the boat owners earlier in the day to put out extra lines, but clearly, they hadn't heeded his advice. (Note: it pays to listen to local knowledge!)
At 4 a.m. it did NOT look like the sailors were having fun, wrapping themselves along the boom and the mast as they fought against the wind, making their way around their boat to secure more lines. We knew the marina personnel were out in force, checking on things and able to assist, which was good. Especially so, since we were only helpless bystanders ourselves, as we couldn't possibly get off our own boat in the wild conditions, being blown away from the pier as we were! Crazy winter winds and a wild night.
This morning was no different...and no rest for the weary either, as the water-maker was due for a set of filter changes. We went down into the forward machinery space to start working, only to find one of the composite cylinders on the Clark pump was cracked and spewing water everywhere. (When it rains, it pours...literally!) Unfortunately, the water-maker is a very vital piece of equipment to have when in the islands and a necessity on anchor. Even in a marina, water in the Bahamas is rather expensive, at $0.25/gallon -- ouch! Of course, now we need to replace that hose more than ever, since we'll be relying on dock water for a while, I suspect. Ron spent a good bit of time on the phone with the water-maker folks, who, thankfully, are doing their best to get it fixed and rectify the situation. Good customer service is priceless, let me tell you!

So, we spent a good part of the day working: changed out the water-maker filters, washed  the various spin-on filter cylinder containers, washed and rinsed down the forward machinery space, and organized some of our storage spaces. Later, when the weather eased a bit, Ron fired up the engines and bowthruster to move the boat into the wind and waves while I wrestled with the starboard lines to tighten them up and bring us within "gangplank distance" of the finger pier. Not as easy as it sounds, as the lines were tight on the horns of the hawsepipes from the high winds...but, I'm getting stronger every day, so I handled it. (Grateful for that, indeed!) 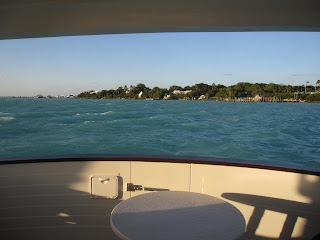 More 2'-3' waves coming across the harbor from the northwest

Ron then biked back to Chacara Hardware with the hope that the "Florida supply boat" made it into port yesterday so the hoses would be in stock. But, as is common in the islands, Ron found it was "soon come" regarding the hoses, since the ship came in -- without the hoses aboard. Oh well...we're making do with the one we have left, and hope it hangs in there until reinforcements actually arrive.

Now, though, it's late afternoon and the wind is starting to abate a tiny bit. I'm sorting through the mail package that arrived, while Ron is heading down the road to The Island Spa for a well-deserved massage. It's been a long day already and we're not even done yet. And...just how many ways can I write about the wind?? It's getting repetitive and tedious! Not exactly the most exciting fodder for the blog, but today was an example of "real life as it happens" aboard. Some days are bliss, others busy, and others...battling weather. But, happily: never boring!
Hugs to all, Karyn and Ron at 5:25 PM