Most cruisers use channel VHF 16 and 68 to hail other boats or businesses. It’s a peculiarity of the George Town scene that once VHF contact has been made, very often the caller will choose a working channel by saying “17 and up” or “66 and down”, or some other similar combination. At first, I couldn’t figure out why they were doing so....I’d move to the working channel, not hear anything, and then move up (or down) one more channel to follow the conversation. (I thought perhaps folks were trying to have a more “private” VHF conversation if they moved off the “stated” working channel..silly, I know!) Ron pointed out that they probably meant that if the chosen working channel is already in use and busy, move up/down to the next channel! Which makes sense, but still, the first time you hear it, it’s rather funny. One day shortly after we arrived, Steve, off Water Lily, hailed us on 16, saying, “go 72, up 4, down 7”, busting on the local convention here. Cracked us up!
Nevertheless, just as we were starting to understand and becoming accustomed to the George Town way of doing things, we’re on the move again, heading back north to Cave Cay once again. The weather is gorgeous, winds are light and variable (currently 7.7 knots from the NNW) and seas are 1’ or less. (Perfect for towing Tingum, which is the way I like it!) Calm seas and fair winds! Ron is also focused on doing some fishing, going so far as to put out a couple lines, even though we’re towing. Not sure what we’ll catch, but we’re trying, at any rate! 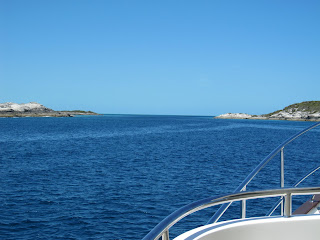 View of Cave Cut as we prepare to enter inside the Exuma Bank
We arrived at Cave Cay Cut without issue, and once inside the cut, we meandered our way north to the next cay, anchoring in the lee of Big Galliot Cay. Once the necessary post-cruise duties were done, off we went to fish from Tingum. We trolled for a good three hours, following the depth contours, as well as going a bit farther out, but to no avail. The ballyhoo bait didn’t entice any fish whatsoever. Oh well....it was relaxing anyway, just enjoying the warm sunshine and incredibly blue water of the Exuma Sound. 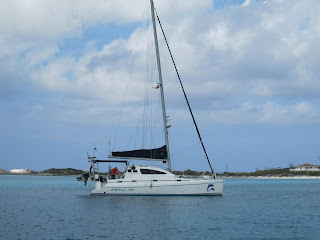 Cloud Nine, on anchor nearby
To our surprise and delight upon our return we saw we had company, as Cloud Nine had arrived while we were out on the sound, and had dropped their hook near Equinox in our lee anchorage! We greeted them happily and invited them over later for another dinner and a movie. Between the two boats, we created an impromptu menu of lamb chops, pasta alfredo, salad and Daphne’s mashed sweet potatoes, along with a lot of wine. Delicious dinner spiced with good stories, and the movie? Fool’s Gold -- rather fitting, being aboard out in the Exumas!
Hugs to all, Karyn and Ron at 9:12 PM