Another windy day, too windy for diving. Looks like we’ll be land-locked for a bit here...even the locals are saying that this is more like March weather than April. So what else is new?? We had breakfast at the Staniel Cay Yacht Club today, did a bit of internet tasks, then ran errands. We dropped off an empty propane tank over at the Isles General store for a refill, and purchased a bit of groceries: celery, lettuce, cucumber, and cheese. We were told to return for the propane tank later in the day, to give the proprietor a chance to fill it. 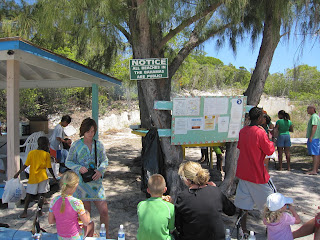 Folks at the Staniel Cay cook-out
The morning cruisers’ net on the VHF noted the Cay’s annual Easter cook-out, a fundraiser to benefit the All-Age Island School here, was going on today. It was to be on the public beach, starting at 11:00 and running all day. We ran our few groceries back to Equinox before we returned to the Cay to join in the cook-out festivities. There were hamburgers and cheese burgers with all the fixings, chicken wings, french fries, all sorts of drinks and even home-made doughnuts for dessert.
Throughout the cook-out area, there were several small kids running about clutching paper bags, still in search of the remaining hidden eggs...too cute! We had a lesiurely lunch beneath the trees along the beach, enjoying the scene. 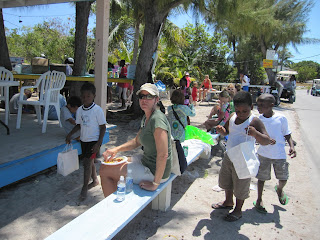 Some of the kids searching for Easter eggs
Later, Ron and I walked about the rest of the town, stopping in at the “Pink Store” and the “Blue Store”(ask they’re known) to see their wares and pick up a few last things to supplement our provisions. Flour, tomatoes, a few oranges, and...barbeque Pringles! (It was Ron’s sudden craving, not mine!) The stores here are tiny and quaint, painted in a rainbow of colors. The town is rather small, so after a short walk around the western side of the cay, we returned to the boat once again. 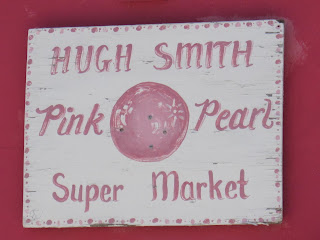 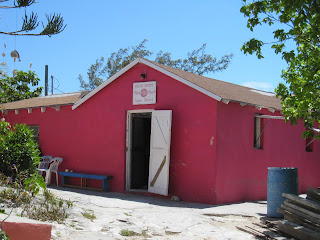 The "Pink Store" at Staniel Cay 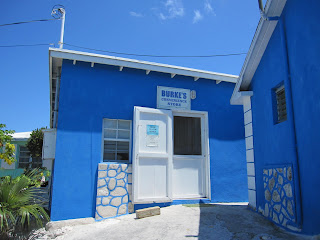 The "Blue Store"
The anchorage here off Big Major’s Spot is crowded with boats of all sizes; we’re somewhat tucked into the lee although the winds remain brisk and the waters a bit choppy. Nevertheless, there’s always something to do! Dinner tonight is aboard Karuna, and then we’ll wait to see what tomorrow brings!
Hugs to all, Karyn and Ron at 12:37 AM