Off to the Exumas!

We headed out of Harbour Island today, going north and then east through the Devil’s Backbone...which I sure wish I had, since I am such a chicken when it comes right down to it. For some reason, I was really nervous about running the Backbone without a local pilot, but Ron had no qualms whatsoever. He had it all charted out with waypoints along the suggested route, and since he’s run it several times in the dinghy, he knew where the tricky points were, and was totally confident. Still, we agreed to have me posted up top of the pilothouse, to have a second set of eyes on the look out for shallow rocks and reef, when we were navigating through the dicier spots along Salt Kettle Bay. The PH roof is a great vantage point, so it was fairly easy to see the thin areas, as we had good light and high water. (We purposely cleared the Backbone at the height of the tide, which is higher than usual due to the full moon.) Nevertheless, I kept hearing Jimmy Buffett in my head, although the song lyrics were slightly changed: “Thin to the right, thin to the left, it’s the only route around...”! It didn’t help any to read the pilot notation on the charts that said “Perfect conditions, local knowledge and expert eyeball navigation required to transit the reefs north of Eleuthera”. Well, we definitely had the first two, and I did my best to provide the third!! No issues, though, no problem! 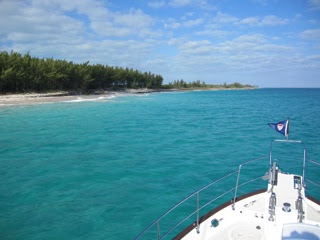 Making our way through the Backbone
Thankfully, the remainder of the cruise south from Spanish Wells through Current Cut and down to the Exumas was just as uneventful, although we did have to keep a sharp eye out for the random coral head  or rock that would occasionally pop up in our path. The Exumas are a  long chain of over 365 islands, most of which are uninhabited, low-lying limestone, with rather scrubby trees and brush, but gorgeous white sand beaches great for walks and picnics. Some of the larger islands have small settlements, but there are hundreds of safe anchorages among the islands so there's always a place to tuck in and explore. 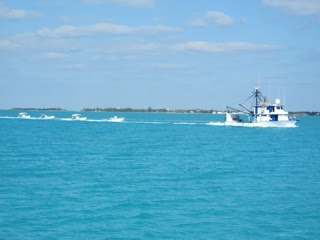 A fishing boat looking like a mother duck with ducklings in a row,
heading to Spanish Wells 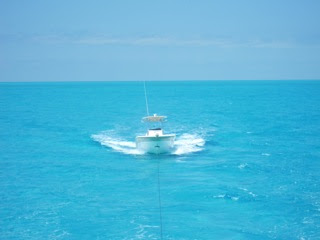 Tingum in tow behind Equinox on the gorgeous
waters of the Exuma bank
We saw the live-aboard dive boat, the AquaCat, just off Allan’s Cay on our way south, which brought back all sorts of fun memories of when we took a few dive trips aboard her after Ally was just certified. The Exuma Bank is gorgeous, and we enjoyed the sunshine on its turquoise waters, appreciating the following seas in the 15 knot winds from the NNE. We picked our way south to Highborne Cay, where our float plan had us anchoring for the night. We joined a large flotilla of boats on anchor in the lee of the cay; clearly we weren’t the only folks to have this idea! It’s a bit barren looking from the west, but the anchorage is protected from the current NNE winds, so we’re happy to be snugged in on anchor. Ron’s making a gourmet meal for us tonight: pork chops in a BBQ onion reduction sauce, twice-baked potatoes and asparagus, to be savored with a lovely bottle of wine. Living the dream!
Hugs to all, Karyn and Ron at 11:15 PM