We spent the day aboard Equinox, hosting Lauren and Rob from Arita, watching the different classes of regatta races. Rob was going to be racing with the Staniel Cay fellows aboard Tida Wave in the A class race later in the day, and Lauren wanted to get photos of the races from a more stable platform than a bouncing dinghy. It was a totally relaxed and enjoyable day, as we watched from the flybridge as the B and C classes went around the harbor, with some boats tacking right through the anchorage here in Gaviota Bay -- one came so close to Equinox I thought they were going to hit our bow!
Again, as for history of the Family Islands Regatta, it began in April 1954 when about 70 Bahamian schooners, dinghies and sloops assembled in Elizabeth Harbour for a three-day racing event. The first sailors in 1954 raced in the same boats with which they used to earn their livelihood: their working wooden sloops. One of the early aims of the regatta was to help preserve the boat-building skills of the Bahamians, and today, while the boats have changed slightly into specially-crafted racing sloops, the the goal remains the same: sail a Bahamian built craft with a Bahamian crew, and prove yourself to be the best sailor in the Bahamas. Ron had the pleasure of watching several of the racing sloops being off-loaded from the big transport ship yesterday as he was awaiting my arrival! 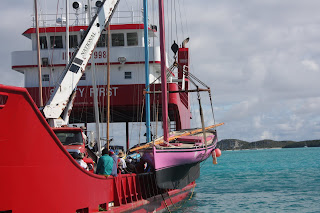 The pink Anna Nicole being off-loaded in Elizabeth Harbour
If you can believe it, communication for the competing boats is done by megaphone, as no VHF or cell phones are allowed on the sloops. It was charmingly Bahamian seeing the chaos of each race --- first of all, there seemed to be no accurate course outlined beforehand until the prevailing winds were determined, when the marker buoys were set out. During the races, you really couldn’t tell who was out in front amidst all the boats, and there were no public announcements for the spectators as to who was in the lead. As an added challenge for the competitors, the course buoys (all two of them) were repeatedly moved throughout the race to mark the different turning points and finish line. Even the finish line seemed to be a moving target with the buoy relocations! Not to mention the challenge of sailing through the myriad of spectator dinghies and small craft shadowing the sloops. But, hey, it’s better in the Bahamas! 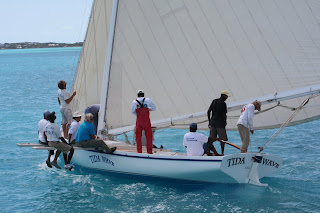 Tida Wave crew heading out to the starting line
Being here to see it all was a blast. We appreciated the unique opportunity to partake in a piece of Bahamian history, thus we were very excited that Rob was invited to be aboard Tida Wave as one of the few non-Bahamians to crew. As it turned out however, the winds were so light and variable, that Tida Wave opted to go with only 10 men as opposed to the usual crew of 12, so Rob graciously stepped aside to let all the Staniel Cay men sail. If they could have removed some of the 7000 pounds of lead ballast instead, they might have sailed with 12, but apparently there was some issue with that aboard the boat. So...we all became spectators instead!

We hopped into Tingum before the start of the A class race, placing ourselves behind the starting line, where Tida Wave was anchored. The sloops all anchor in a line, awaiting instructions from the Regatta Committee boat, then there is gunshot to signal hoisting of the sails and weighing anchor, and a second shot to signal the start of the race itself. Barely organized chaos! 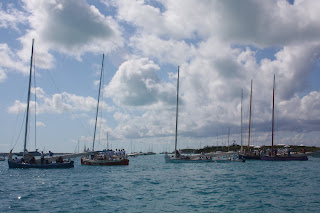 The A Class sloops all in a line, awaiting the
starting gun to hoist sails and weigh anchor 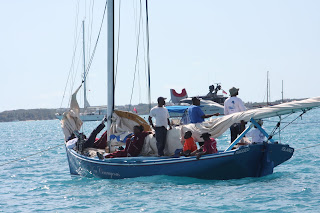 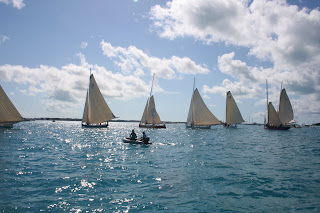 And they're off!
We cruised along with the other spectators, following the sloops on their course, shooting photos as we went. It was a challenge just to navigate amid the other dinghies and small craft circling everywhere! But it was really interesting to hear Rob’s sailing commentary on the tactics of the leading boats, since we know so little about it. Tida Wave was first off the line and led for the first part of the race, but New Courageous made a strategic move after rounding the second mark and slipped ahead. Tida Wave made a valiant effort, but never could overcome the leader. Instead, she wound up in a neck and neck sprint for the finish with another boat, vying for second, which they achieved. This was just the first day, for there will be more racing tomorrow! Another Staniel Cay boat, the Lady Muriel came in 5th. 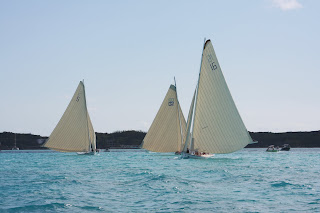 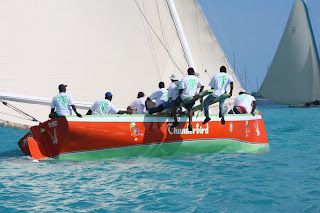 The boys on Thunderbird out on the pry board 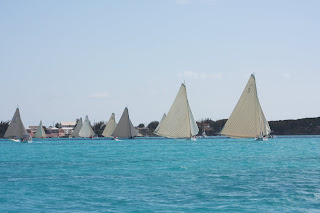 The A class sloops in action 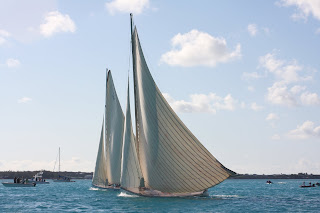 Tida Wave taking second place by a narrow margin
After a long day in the sun watching the races, dinner was a quiet, relaxing affair aboard with just the two of us. We dined on the aft deck, enjoying the calm water shimmering about us in the warm night air. The anchor lights of all the boats around us looked like stars, floating in the sky above the water...a perfect end to a lovely, lovely day!
Hugs to all, Karyn and Ron at 10:38 PM