...which is getting really, really old. But yes, the winds continue to blow. (And blow and blow!) In case you were wondering. They are gusting up to 28+ knots, but have been consistently around 20-25 knots for most of the day today. Elizabeth Harbour is wickedly choppy and more and more boats are getting tucked in along the lee of Stocking Island. As I write, I’m hearing all sorts of chatter on the VHF about a boat that’s dragging anchor, with other boats heading to the rescue while the absent owner is located. It’s quite an active community of cruisers here, so folks are very willing to help out one another. That’s reassuring on a blustery day like today! 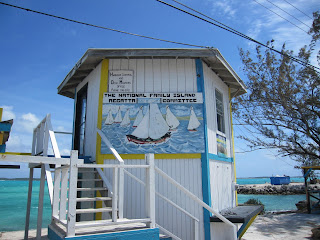 The Regatta Committee stand on the waterfront
of Elizabeth Harbour, George Town, Exuma
Other than the winds howling in the masts and rigging all around us, today was another low-key day. We went into town in the morning to take in the trash, and to fill an extra can of fuel for Eclipse. (No more running out of gas for us!) While we were in town, we walked along all the fish shacks and food shanties that are being constructed for the National Family Island Regatta. The line of shacks extends all along the harbor front, and we’ve been told that it will be quite a sight to see when they are open, with an amazing variety of food to sample. The woman at Tino’s  Shack 23 said they’ll have everything from seafood to conch made a variety of ways to sheep’s tongue. Might be a bit adventurous and try some of that! In any event, we’ll find out next week when the Regatta is underway! 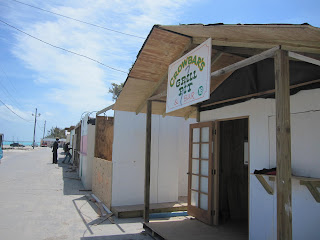 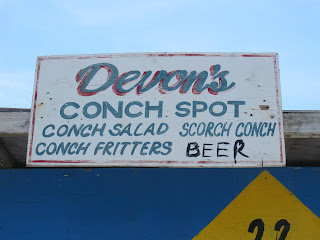 Scorch Conch is exactly that...fire on your tongue! 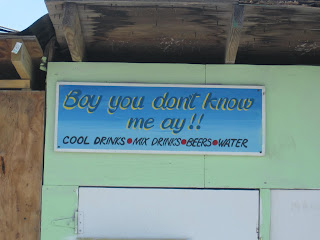 We've got to stop here, just because of its name!
After returning to the boat, we went into Gaviota Bay for a slow lunch at the St. Francis Resort and Marina, where we purchased more internet time and generally just relaxed over our food. Later in the afternoon, we just hung around the boat. Ron filled some scuba tanks for Greg off Karuna, and arranged to get some waxing done on the boat later in the week, and we napped, read, did crosswords or sudoku puzzles and basically didn’t do much of anything. A lazy day! There was a sundowner on Hamburger Beach this evening, but we didn't really have the motivation to go, as it would have been a sloppy, wet ride in the dinghy to get there. Everyone was in their foul weather gear just for the ride to the beach! There's always tomorrow!!
Hugs to all, Karyn and Ron at 12:57 AM