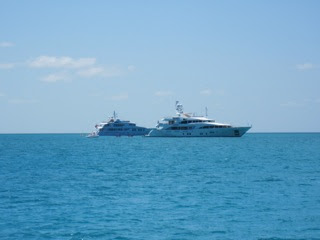 It’s a high-rent neighborhood here at Highborne Cay...we are anchored amongst 6 large yachts of 100‘ or more, and they just keep coming in! No matter which window I look out, I can see a behemoth ship anchored nearby. It is Easter weekend, so it’s prime time for charters and such. But, Ron and I have deduced that this must be the place for day-trip or weekend folks from Nassau, as there’s a lot of Silverton and Carvers coming and going here as well. There are no trawlers except us, and only a smattering of sailboats. Definitely a transient place, not a destination, but gorgeous nevertheless.
This morning Ron and I went out exploring along the reefs off Long Cay, just south of Highborne to do a bit of diving. We anchored right on the edge of the wall that drops off into Exuma Sound, dropping the hook into a sandy patch at about 65 feet. Ron had switched out the anchors on Tingum, from Eclipse’s smaller FX-7 fortress to Equinox’s FX-23 stern fortress, which was rather over-sized for Tingum, but better to be anchored well than not secure enough! We followed the anchor line down to check its set, and then swam out a few yards to the edge of the abyss and found...a first-class dive site!! There was no current (it was stand of the high tide) and while visibility wasn’t great, the wall and its coral formations were stunning, with long tendrils of black  and green wire coral poking out from the sides of the wall. There were large solitary disc coral,
Right after we surfaced and were peeling off our dive gear, we were startled to see another small center console filled with people dropping anchor right next to us. It was weird, as there was no one else in sight, so why were they snuggling up to us? (Did we have the sign out again? You know the one, the sign that says, “Please anchor as close to us as possible!”) After they revved their engines and dropped their anchor without regard, then they asked if there were any other divers in the water! No real clue as to why they were anchoring there, since they didn’t appear to have dive gear aboard, and the site was too deep to snorkel.....Just odd!!
Despite our hopes, the weather conditions were rougher later in the day, so making another dive on the reefs wasn’t feasible. After returning to Equinox, we decided, rather spontaneously, to dive anyway...but merely under the boat to clean the hull. It was in need of a good scrubbing, even though we had the hull cleaned in January. We spent a good hour working to remove the slime and bits of growth bits that were starting to grow, with the company of a very large remora the entire time! Unfortunately, it didn’t help us clean the hull!
The evening was another quiet dinner aboard, with a spectacular sunset as a side dish. A great end to a lovely day!! 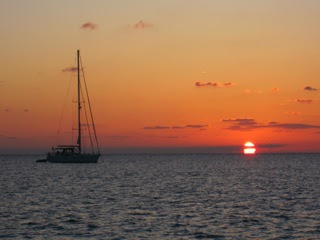