We moved the boat today, north to Big Major’s as the winds stoked up last night and bounced us but good in the anchorage at Bitter Guana. Not the normal winds out of the southwest, but there’s a cold front coming through (again -- what the hell else is new this season??). SO, after a fun 5:00 in the morning move of Tingum -- bouncing too close to Equinox while on the hip, we moved it to let it hang back off a long painter. Nothing like a bit of O’dark-thirty fun on the back deck!
Mid-day, Ron moved Equinox around Harvey Cay while Karyn took Tingum more directly north through the shallows and coral heads, reconnoitering the depths during low tide. We opted to anchor at Big Major's; not fabulous during any westerly blow, which might come tomorrow night, but a far better anchorage than where we were in these southerly winds. 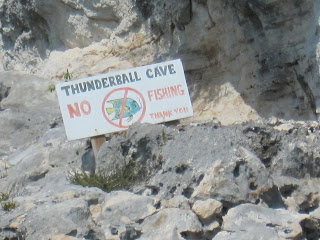 Once anchored, we picked up Sam and Heather off Cloud Nine and popped over to Thunderball Cave to snorkel a bit. This was after playing with the swimming pigs on Big Major...I got a lot of photos of the greedy creatures swimming up to the boat, looking for hand-outs. Despite being very adept swimmers, it still is rather  hilarious to watch! 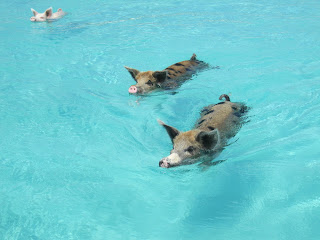 Making a bee line for the boat in hopes of food 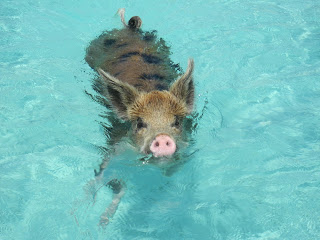 Insistently looking for a hand-out!
Thunderball Cave was actually quite a nice snorkel: it's a group of partially submerged limestone caverns, with a natural lattice-work ceiling overhead in the largest cave that allows in beautiful shafts of sunlight to flicker on the water below. The caverns are filled with a variety of fish, from grunts and small juveniles to a large school of sargeant-majors just outside. There were gray angelfish, queen angelfish, small grouper, even a few small ballyhoo, I believe, among the fish that darted about. The coral was bright and healthy, and the caverns itself was really interesting. We snorkeled mid-tide  with a ripping current, so got a nice little swim for ourselves as we went around the parts of the chamber and out the various swim-throughs. Now we have to go watch Thunderball to see where Sean Connery was in the cave!

Unfortunately the evening wasn't as relaxing, as the 12 Kw genset shut down today, unexpectedly. Ron focused on the impeller, hoping that was the cause, but we both were dubious since we'd just changed the impeller during the last oil change not too long ago. Yet, we checked it out and while the impeller looked fine, we still replaced it.  Once the new impeller was in place, we re-opened the seacock, and....water started to drip from the back of the pump. Of course, a spare raw water pump for the generator is the one item we don’t have, so we will make our way home from here more directly than not. Thankfully we have the 20 Kw genset to back us up, but that's what we reserve for windlass and bowthruster use, so we are being extremely careful with monitoring its use. Argh! Boat systems: essential but often frustrating!
Hugs to all, Karyn and Ron at 3:54 AM