We were up early and had a beautiful morning cruise round Cave Cay and Musha Cay in Tingum with Sam and Heather. They hadn’t seen the resort on Musha Cay, and as the island is just so pretty, we appreciated the scenery as we moved along the shoreline. After the cruise, we dropped them back at Cloud Nine, as they were heading north to Black Point for the next night’s anchorage. We went back out for a bit more fishing ourselves (again in vain) before we prepped Equinox for another move ourselves.
During the engine room check, though, I noticed some water coming out of the 12 kW exhaust elbow vent fitting, so we spent a half hour inspecting and trouble-shooting the vent cap. Ron fixed it by re-seating the valve inside the cap, and after a bit of adjustment, the problem was solved. Still, enough water had come through that there was some salty crust to clean up on the sound shield. We did a basic wipe-down, but a more thorough cleaning is now on the agenda for tomorrow!
We headed up to Bitter Guana, just north of Great Guana Cay, where we so enjoyed hiking among the rock iguanas. It’s a beautiful quiet anchorage, and while we anchored off Black Point last time we were here, this time we wanted a more scenic neighborhood. We shared the cove off the north end with just one other boat already anchored there. Once situated, we headed out in Tingum in the late afternoon, doing a bit more fishing out on the Sound via Lumber Cay Cut. 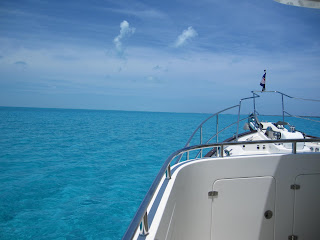 Equinox heading to Bitter Guana Cay
Unfortunately, as was the case farther south, nary a bite! We put the time trolling to good use, as we investigated the depth contour lines to see if there was any suitable areas for diving, as the reef drops off quite spectacularly in some spots. After finding a couple areas that had interesting bottom profiles, we dropped anchor near once such site to see what it looked like. It was in fairly deep water (~85’), and with only 300 feet of anchor line, I opted to stay aboard while Ron made the dive.
He later reported he was happy I stayed aboard, as the anchor was holding tenuously at best on a hard, scoured bottom near the reefs. The dive site wasn’t too interesting in itself, but Ron did encounter a LARGE loggerhead turtle, a good 5-6’ long, that came quite close to him. That made the dive for Ron, as he loves seeing the larger species, from turtles to sharks and rays! (We later learned from the Staniel Cay Dive Shop that the turtle is known as "Crash", since it's a regular on that reef. Apparently Crash doesn't see too well and has been known to bump into things, including divers!) Ron reported that there was a surprising lack of small juvenile fish, but as he saw some large lionfish, that may be the reason, as lionfish are voracious feeders. We both find the lionfish invasion rather worrisome, as it does appear to be impacting the native fish life here.
We stopped in Staniel Cay on the way back, to have a cold drink at the SCYC and use their internet connection. We called Ally to check in with her, and did a cursory check of e-mail, but the connection wasn’t very fast so it was a bit difficult to do much else. There was another Kadey-Krogen trawler at the Staniel Cay Yacht Club docks, a KK48’, (In Your Dreams) along with a pair of Grand Banks (Intermission and Interlude) near where we pulled in with Tingum. We stopped to chat with the owners, as Interlude had been in contact with Ron in George Town, offering some helpful insight regarding our SSB, which we’re trying to troubleshoot. The SSB hasn’t worked right since it was installed, and it’s becoming obvious there is DC interference or a grounding issue that needs correction. Not being electrical gurus ourselves, clearly it’s something we’ll need to get remedied this summer when we’re back in the States.
We returned to our anchorage off Bitter Guana, delighted to find that Cloud Nine was there as well! They had stopped at Black Point for the day, but after exploring ashore, they too decided to move farther north. We’d been telling them how pretty Bitter Guana was, and once here, they’d spent the afternoon on the beach with the iguanas, admiring the limestone formations. We enjoyed a lovely sundowner aboard Cloud Nine before heading back to Equinox for a quiet night on anchor.
Hugs to all, Karyn and Ron at 3:28 AM