Another full day of sunshine and fun here, as we (Ron, Greg and myself) went out for a dive in the morning off the reefs of Stocking Island. The reef is farther out from shore and the wall drop-off begins at a deeper depth than at points farther north (like Highborne Cay), so  we were a bit constrained by the amount of anchor line we had aboard. I didn’t want to dive too deep anyway (just being cautious post-accident) so we dropped the hook in 70’, among some tongue and groove coral that looked a bit promising. The seas were a bit choppy as the winds were kicking up a bit, and unfortunately, the dive was rather nondescript and disappointing: no dramatic coral profiles, few fish except for a large lobster out dancing in front of his hole, obviously cheerful that it was no longer lobster season! We headed east towards the wall, but it was too far a swim to make it feasible, so simply retraced our path back to the boat. As usual, best to go out with the local dive masters here and get the scoop on some good sites!
After a good wash down of Equinox, with Greg generously helping, we started out in tandem with Karuna’s tender to go to George Town. Thankfully we had them as company as...Eclipse promptly stopped running after a couple minutes into the trip! They had to tow us to the docks at Exuma Docking Services, where we thought they had fuel. However....no fuel docks to be found here, as the ones at EDS are not in service. We had a fuel can with us, so filled that, and after an hour's worth of tinkering with the engine and confirming it wasn’t bad fuel, we found the problem: lack of fuel! Ooops!! Ron swears we didn't run the dinghy all that much since Harbour Island, but clearly we ran it enough! Thankfully we didn't run out on the way home across the bay last night in the dark!! 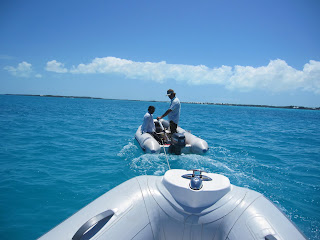 Eclipse being towed after the engine died in the
middle of Elizabeth Harbor
After refueling, Ron and I then walked about George Town in the afternoon, looking for the local dive shops and seeing all the preparations underway for the Family Islands Regatta next week. The Regatta draws racing boats from all over the Bahamas, as all entries must be Bahamian designed, built, owned and sailed. It's one of the oldest regattas in the islands, dating back to 1954, when it was created as a showcase for the skills of the Bahamian sailors and boat builders. Sounds like it's a huge party, so we'll find out next week when it's in full swing!
George Town has a number of businesses and buildings around the shores of Lake Victoria, usually called "the Pond". You can only enter the "lake" through a small opening under a fixed bridge with a vertical clearance of about 8'...shades of Bermuda and the entry into Harrington Sound! But it is picturesque in its own way! 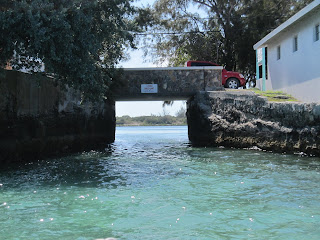 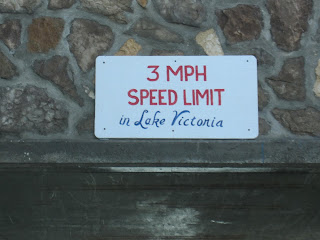 We provisioned a bit at Exumas Market, which was like going into a gourmet grocer after the other out islands! (Wow. A choice of different block cheeses!) We also walked to the Peace and Plenty to get info on the local dive guide there, then stopped at the liquor store, getting some wine and beer, as we were down to the very last bottles of each libation. In the islands here, rum is plentiful and inexpensive, but wine is definitely more pricey than one would pay stateside, and rather limited in choices. (Oenophiles, take note!!) 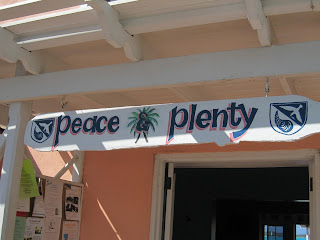 After hauling all our provisions back aboard, we enjoyed a quiet evening aboard. We had some impromtu visitors just before dinner -- Chris, and some of his fishing cohorts from the island as well as off one of the yachts here joined us aboard for a bit. Again, meeting new folks and making new friends -- a part of cruising! Love it!
Hugs to all, Karyn and Ron at 11:54 PM