Today was sort of a repeat of yesterday, as we walked about Black Point in the morning again. Lorraine’s Cafe was closed, unfortunately, though we still tried to use the wifi signal available to get online. But, alas, it was to no avail, and after several fruitless attempts at getting our mail to download, we gave up and returned to Equinox.
We brought Karuna and Greg over to Bitter Iguana Cay for a picnic lunch, and we did more exploration of the island. We did a bit of hiking, crossing the cay to the ocean side, where there are numerous cuts and coves carved out of the limestone. We returned to the western beach for lunch, where we waded and swam, and faced the stares of the iguanas all around us. They really aren’t shy! 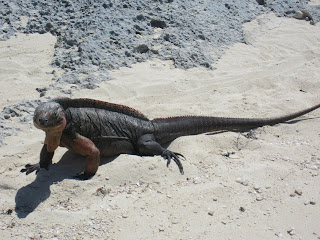 Another iguana friend lurking beyond our beach towels 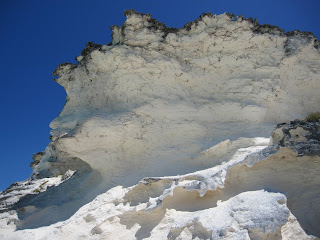 Some of the dramatic limestone formations here on Bitter Guana Cay
In the evening we all went over in Tingum back to Big Major’s Spot and joined in a sundowner on the beach with other cruisers. It was a lot of fun, a lot of food, and we met quite a few of the cruising boats crew and made new friends, including the folks off Forever Young, a boat from our former stomping grounds, Baltimore Marine Center! They’re heading south in tandem with another boat, Pomboo (“dolphin” in swahili, I guess), so our paths may cross again! Most likely in George Town, should the wind ever die down and give us decent conditions for going outside on the Exuma Sound! Let's hope so! 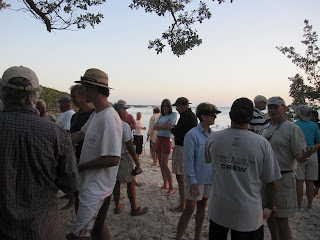 Folks at the beach sundowner
Hugs to all, Karyn and Ron at 1:08 AM