Back in the water for Karyn!!

It was an steely gray, low-light day, but happily, winds were light and variable -- for a change! Seas were wonderfully calm, and so diving was on the agenda for Ally, Ron and...me! I've haven't been pushing things, just enjoying the fact that I feel stronger every day and now feel darn near 100%. So, after more than 8 weeks of recuperation and rest, and fully 5 weeks after the neurologist cleared me to "start resuming normal activities" when I started getting out bicycling and walking, my patience was rewarded. I decided it was time to test the waters -- literally!
Ron, Ally and I made an early morning dive down at The Plateau, a gorgeous dive site just south of Harbour Island off the east coast of Eleuthera. I was very conscious about monitoring my ears when equalizing at the start of the descent, but there no problems at all. Absolutely nothing out of the ordinary, the only bit of discomfort was that the water was still so darn cold!! It was only 72 degrees, definitely a bit colder than usual as this year has been one constant cold front after another here! (Okay, it's all relative, but I'm ready for some warm weather diving folks!!) 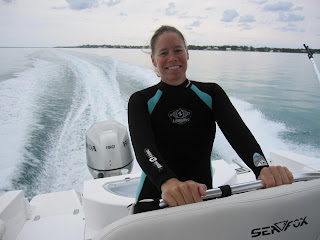 Karyn, ready to dive, enroute to "The Plateau" off the coast of Eleuthera!
Happily, throughout the remainder of the dive, everything proceeded according to plan without any issues or concerns. The only "disappointment" was that the overcast gray skies muted the colors of the reef a bit ... but, I didn't mind in the least! The reef is so healthy here, with such a beautiful array of coral, sea fans, sponges and reef life, that it was wonderful to see. Ron actually dove with his new underwater video camera too, to "document" the occasion and to get some practice with using it. I found a couple of lobster -- including a small spotted lobster -- tucked under ledges, and we saw a southern ray feeding in the sand beside the coral mounds. Ally spotted several flamingo tongues munching away on some sea fans, and we all enjoyed the large schools of yellowtail snapper that were cascading over the reef. It was beautiful, and I appreciated the the chance to see it!

The afternoon was a quiet one, although not without its frustrations, as we are back to having issues with the water-maker -- again! Argh!! Now it will run for an hour or two, then starts alarming, but without any alarm message as to what is going wrong, before going to auto-flush mode. Ron and Dick have been on the phone a few times already working through possible changes to the input pressure settings, but so far, no magic spells have gotten it working again for more than a bit at a time. We may be seeing Dick sooner than anticipated! Oh yes, living the dream: fixing your boat in exotic locations!
Other than that...Ron's been busy doing the pool-, class- and boat-work required for his Rescue Diver certification, and Ally has been enjoying the last few days of her spring break at the beach. I was occupied as well, back in the swing of boat projects and routine chores, from general cleaning to filling tanks. The evening was a quiet one, listening to Ithalia's live music up at Sunsets, then dining aboard Equinox. All in all, it was a great day! It feels exciting to be back in the water again!
Hugs to all, Karyn and Ron at 9:24 PM