Nothing Should Be Easy...

...according to Captain Ron, because then, there'd be NO challenge, NO sense of accomplishment!! Nope, nothing should be easy or straightforward -- and aboard a boat, it usually isn't!! To illustrate this point, we got a call today from Dick, our intrepid water-maker guru who was coming in today on the afternoon flight to repair our water-maker system, with the needed replacement parts in his checked baggage. Except that he couldn't get on the airplane!! No fault of his, but at the airport, TSA refused to let him bring the Clark pump onboard a commercial aircraft, since their x-ray machines couldn't identify/see all the way through the pump! (Now, we're all for security; we're willing to comply without complaint and have done everything and anything that TSA asks of us for the good of all, but clearly security is being tightened these days!) Dick spent a couple of hours explaining everything about the pump to both the TSA and the FAA representative, trying to get the pump cleared, but it was still refused.


The frustrating aspect of it all (besides the delay in repairs) is that the pump is a part that Dick has brought aboard with him on many other commercial flights in the past, without any issues. So, why now, why TSA suddenly thought it was unfit for commercial traffic is unknown...but, they did. Oh well -- another curve ball! As Dick was quick to point out, at least the part didn't get bogged down in the TSA/FAA bureaucracy, like some poor fellow's life-raft, which apparently was held for over three weeks until they gave it back to the poor guy. (Ok, it's a second-hand story, but again, just showing that plans can go awry, and usually do!!) But in the meantime, until we can figure out a way to ship or airfreight the innocent Clark pump, we're not getting our water-maker fixed here!! Nope, nothing should be easy...and, clearly isn't. Goodness!!


And our day had started out so well! Ron and I enjoyed the sunshine by bicycling for a good hour around the island--including that BIG hill on the north side of town that sucks the wind out of me yet. (It's getting easier, though!!) Plus, today, I started a "Rooster Count",  just for fun. I think I mentioned in a previous post how plentiful the Briland roosters are around town and along the roadsides, but today, since I hear them all the time, I thought I'd count them as we bicycled. Today's "Rooster Count": 21!! (And no, I didn't count any twice!) Did I mention the island is only 3 miles long? Lots of poultry out there! 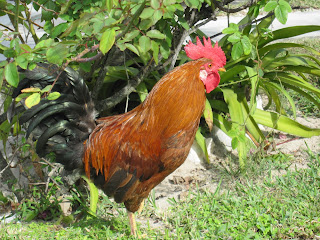 One of the many Briland roosters

After our bike ride, Ron and I then took a long, leisurely walk on the shores of the Atlantic, along Pink Beach for another hour. We were simply enjoying being outside today, awaiting Dick's arrival, and getting some exercise. Since I still am not totally up to full speed, stamina-wise, the walking and biking are a big help! It might take a while to regain my former strength, but I'm patient...all in good time! After our walk, we biked back to the  boat, where Ron and I shared a salad lunch aboard, and went through our mail package that has caught up with us.
The afternoon was a flurry of phone calls about the Dick's flight arrival time, and then his unfortunate situation with the water-maker part. As stated before, nothing is easy, but...gotta go with the flow! SO, in that vein, Ron went out and took out his frustrations by playing a bit of tennis with Greg, while Karyn did more mail-sorting and responded to the incoming correspondence. Due to the surprise change of plans regarding Dick's non-arrival, we re-routed dinner arrangements... so we simply went up to Sunsets and enjoyed The Brilanders playing once again. Always fun!! Afterwards, we bicycled (yet again) to dinner,  just a bit down the road to Ma Ruby's Tingum Village, for a delicious seafood dinner before it was back to the boat, and off to sleep! What will tomorrow bring? 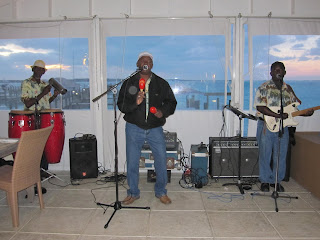 The Brilanders at Sunsets Grille, about to get the crowd dancing!
Hugs to all, Karyn and Ron at 9:39 PM