Back to the Island!

Harbour Island, that is! And it feels pretty darn good to be back! Ron and I spent all day Tuesday, from the early hours to the late afternoon, catching flights and making connections to get back to North Eleuthera Island. We were both bone-tired when we finally got back aboard, and a little bit surprised to find how many more boats were at the marina here. Suddenly, we are looking rather tiny for ourselves compared to the large megayachts on the neighboring T-heads!
While it was a frenetic five days stateside, it was also very heart-warming and satisfying to be with Ally and good friends. As I mentioned in the last post, Friday was a high-speed day with lots of appointments and errands, and we followed up that fast pace with more continued non-stop activity on the weekend. We sorted mail and dealt with bills, phoned folks non-stop and caught up with friends, then Ally, her roomie Eliza and I hit the stores to shop for the listed supplies needed for their upcoming Oldfields May Program trip to Argentina. I also did some gift shopping for island friends and got some necessities for the boat, then relaxed a bit in late afternoon as we watched some of the March Madness tournament games (Go Michigan State!), before finally having a long moment to sit down when we treated our dear neighbors to dinner Saturday night for hosting us at their home. We had some family members along as well, so it was a lovely evening and we appreciated being together! Sunday evening we caught up with more friends for dinner, so it was a social whirlwind from start to finish on the weekend! 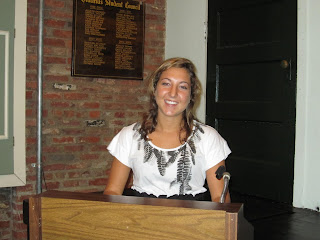 Ally at the podium, ready to speak
Monday was an early morning, as it started off with Ally's Senior Presentation at Oldfields traditional morning meeting, which we loved. She did a great job, in our opinion, as she spoke well. Her focus was about about her life growing up aboard a boat, learning responsibilities such as running the dinghy for dog walks on the beach to trash runs to being the "bilge rat" when she was small. It was very humorous and cute, and she concluded with the statement that FINALLY, she is a 5-YEAR Senior at Oldfields!! (While a high school for most of its history, OS admits a few lucky girls each year as 8th graders, and Ally was one such chosen.) After the presentation, Ron and I spent a bit of time with Ally before we left to do some computer and network hardware shopping -- searching at several stores -- for another friend until the late afternoon when we went to watch Ally's first lacrosse game of the season! GO OS! She and her teammates played hard in a close game, and while they didn't prevail, watching was both wonderful and bittersweet. It was great to see Ally play, but it was also emotionally hard knowing that this will be the only game we get to see this year, since we will be out of the country being aboard Equinox the rest of the spring. Having gone to all her games in the past, it's something that I will dearly miss. There were more than a few tears at the end of the game!
For an apt conclusion to our time here, we attended a lovely Passover seder with our neighbors and members of their extended family. While at a different home than in years past, it was nice to continue the tradition, and we appreciated the hospitality and generosity! It underscored yet again that this is a year of change, as we cruise in far-away waters. Next year in....?
Hugs to all, Karyn and Ron at 9:15 PM