And fresh water, no less!! Our water-maker is fixed, up and running happily, thanks to Dick Murray of Murray Marine, who arrived to repair the pump on Friday. Even better, Dick had the Clark pump in tow, as he was successful in finding a commercial carrier to bring him  from Florida with the benign pump as cargo! Although, his trip was not entirely without more drama, thanks to Mother Nature! The storms coming across Florida and over the Bahamas were so intense, that the plane kept trying to get around the worst of the weather, only to be re-routed to Freeport!! They landed, and awaited until a good weather window opened up to allow them to get into North Eleuthera airport. (Apparently the storms were so bad, that Fort Lauderdale airport shut down for a while as well.) Meanwhile, back at Harbour Island, while the weather was overcast and windy, the rain only threatened and never made an appearance, so we were baffled as to why Dick hadn't shown up yet! 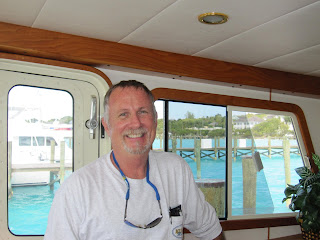 Dick Murray of Murray Marine, our water-maker guru!
It was a slow morning otherwise. The girls slept in, and Warren and Christine came over for a bit, discussing possible boat chartering and buddy boat options for a summer vacation, before the younger girls left to do some window-shopping. Ron stayed aboard to wait for Dick's arrival, while Karyn accompanied Christine and Warren to the Dunmore Beach Club for a walk down Pink Beach. The weather held, windy and warm despite threatening skies, but thankfully there wasn't any rain before we headed for lunch at Sip Sip. Warren and Christine were awaiting some friends, also staying at Dunmore Beach Club, who arrived on island in time to join us for lunch, so we had quite a large and jovial crowd! Conch chili, Lobster quesadillas and home made fish cakes ruled the roost yet again, delicious as always!
Karyn returned to Equinox in the afternoon, and heard of Dick's saga with the weather delays. Talk about a challenge just to get here, goodness!! Once Dick arrived at long last, he and Ron immediately set to work on replacing the blown pump, while Karyn tidied up, getting the boat ready to host an evening cocktail hour aboard with the Dunmore Beach Club group. Again, no rain, despite the impending front moving through, so that helped!! The water-maker repair was a challenge!! As Ron said, nothing should be easy, and it wasn't: we discovered the replacement pump had a bad piston! So, through expertise, ingenuity and necessity, Dick cannibalized the blown unit and used its needed parts to get the new pump working. Dick also discovered that a section of the original unit was improperly assembled, so he rebuilt that as well...talk about nothing being easy, this was nearly relentless!! By the time Dick had the unit performing well with pump was in place, pistons properly working, and pressure appropriate, everyone was arriving aboard, and definitely time for  light h'or doeurves and drinks! It was a nice treat indeed. 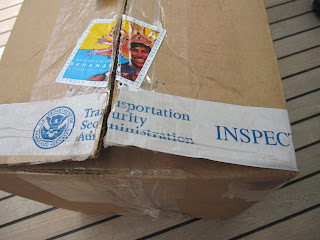 The box with the infamous Clark pump, finally aboard!
Dinner was a split affair: the Dunmore Beach folks returned there for a dinner reservation while we relaxed with Dick and indulged in a great fresh lobster dinner aboard Equinox. Ron had acquired more lovely tails from the local fisherman, so he and Karyn cooked, the girls cleaned up afterwards, then we all headed to Dunmore Town to show Dick a bit of island hospitality! Dick hadn't ever been to Harbour Island before, so we toured him around the town a bit before stopping at Valentines, hoping to meet up with the other group again. The night being young, we hung out for a bit, then meandered over to Gusty's (oddly quiet, as it wasn't open yet), so went to Daddy D's, which was also very quiet. Apparently it was just too early for night life! We eventually went back to Gusty's, where dancing and music was finally in full swing! We talked, danced, and people-watched, having a great time but found we were too exhausted to stay very late. It was a long, but successful day!
Hugs to all, Karyn and Ron at 3:42 PM