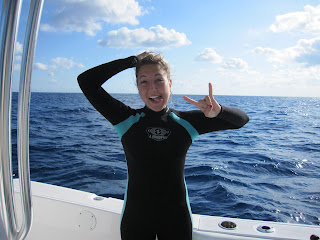 Ally getting her wet suit on, getting ready to go!
We had some blazing sunshine for a change today! There were just a few clouds, but the sun actually had that some of that spring warmth to it. Finally! Since the cold north winds are still out of the west-northwest, we three headed out Monday morning out to the reefs off the lee side of Eleuthera, where Ron and Ally dove "The Arch". Ally hadn't been diving since December when we were at Green Turtle Cay in the Abacos, so she was both eager to go but also a bit concerned about her ability to equalize her ears, as she's been a bit congested. Thus, she and Ron planned the dive accordingly, discussing options should her ears be an issue. 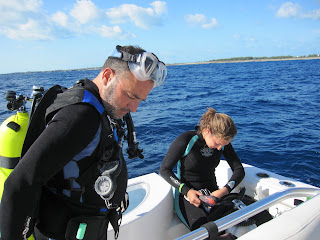 Ron and Ally gearing up to dive
Once in the water, all systems were go, and away they went for a beautiful dive. It was Ally's deepest dive to date, going to 110' to view the arch. She and Ron didn't stay long at that depth, of course, as most of the dive was spent at 60'. Nevertheless, she and Ron did a longer safety stop at 15' on the ascent, and both were all smiles as they emerged from the water. As Ally said, it was a "totally cool dive", and happily, she had no issues with her ears at all. 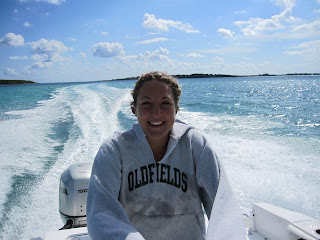 Ally's all smiles on the ride back from the reef
Post-dive, rather ravenous from being out on the water, we all went to Valentine's for a fabulous lunch on their open deck restaurant. Ron went out aboard the Valentine's dive boat to do more course work with Shawne, acting as crew for a group of divers and snorkelers while Ally and I went "downtown", stopping at the fruit stand, then a pit stop at the Pigly Wigly for a few other essentials. Chores finished, we had a lazy afternoon in the lee on Pink Beach, where Ally napped, I read, then we chatted and walked the shoreline in the sunshine. Relaxing!
Before dinner, we went over to the Blue Bar for a Bahamas Ministry of Tourism-sponsored welcome event, "A Taste of Briland". The Afro Band was there to play, along with a number of different speakers, dancers, and fun competitions amongst the visitors. Despite my trying to look invisible, I found myself with four other women being picked to be a contestant in a game of "musical chairs". (Having seen the men's competition, I knew what was coming!) The musical chairs were actually minus the music - each contestant had to find certain announced items and return to the chairs before one chair was taken away. I was mortified! 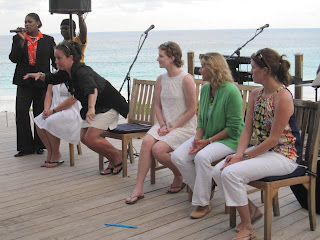 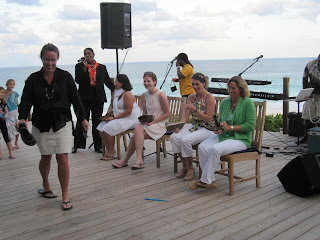 One competitor down, three to go... 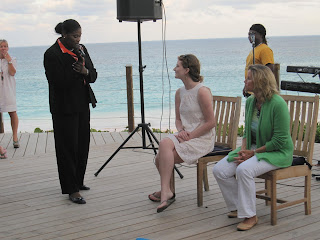 Getting our final instructions on the next "item" to find
Items included a man's shoe, a bit of Bahamian money, a hair-pin, and every time I got back to the chairs, I was stunned to see I was still in the game. Then, the final item was finding the island's head nurse at the Harbour Island Clinic, who was in the audience. (The men had to find the Harbour Island Chief of Police for their final item.) I couldn't believe it. The head nurse, whom I now had to find, also happened to be the very same nurse who was at the hospital clinic the evening when I had my accident!! Remember now, that due to my skull fracture, I have no recollection of that evening save for a few fuzzy moments, so had NO idea what the nurse looked like, even though she was the one who opened the clinic back up and sent someone to get the doctor!
My only remaining competitor had no idea whom to look for, but I ran to Ron, since I knew he would know! I asked him to point out the nurse, which he did: "The woman in green, at that table"....so I turn, only to realize there are two women in green at the same table! I raced up to the nearest "woman in green", not entirely sure if I had the right woman, but after a moment it was clear she recognized me. After a brief conversation, she admitted she was Nurse Saunders, and accompanied me to the front, where I was announced the winner!!
As the winner, we received a certificate for dinner for two at Sip Sip or the Blue Bar (both part of the Pink Sands resort), which was a nice treat indeed! But...in reality, the true owner of the certificate was Nurse Saunders, and after we claimed the prize, we gave the certificate to her. Definitely the right thing to do...and, clearly meant to be. Her ready response earlier in the year probably saved my life, in my opinion, so it was the least we could do!
Hugs to all, Karyn and Ron at 3:22 PM