..."GALE CONDITIONS EXPECTED N OF 25N TUE THROUGH WED". This from NOAA's weather forecast for our area of the Bahamas for tomorrow. Unfortunately, not a surprise, at all, the way the weather has been behaving! Rain, wind, cold....we're SO sick of it, just like the rest of North America. Meteorologists say we have the "Canadian Arctic air mass" to thank. Well, no offense, but the Canadians can keep their arctic air...we don't want it!! What more do they want?? They already got the hockey gold, right? :) 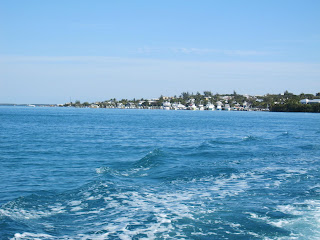 The gorgeous water east of Harbour Island
Nonetheless, today was a lovely day here off Eleuthera...sunshine and quiet waters in the harbour, so still you could hear the roosters crowing all over the island! Ron was eager to dive, not wanting to waste such a pretty day, so by the time I made sandwiches and packed a lunch, Greg had joined us as well and out we went aboard Tingum. It was a bit rougher outside the harbor than anticipated, but nothing that the tender couldn't handle. Looking far to the east offshore, we could see a hint of "elephants on the horizon" -- the telltale ruffle of large waves and swells. But, conditions were so much better than the seas Ron and Shawne experienced yesterday, that we continued south, with a bit of a following sea.
By the time we arrived at the James Point dive site, the swells were diminishing, and conditions were good enough for diving, so we dropped anchor in the sandy bowl there. The boys had a nice dive, although Ron noted that the fish were less numerous today than the last time, perhaps due to the rough and chaotic conditions of yesterday. Still, a pretty site and always good to get in the water! We dropped in some fishing lines as we headed back north, meandering our way along the deep reef contour lines on the chart (unfortunately without success -- we just can't seem to attract the fish from the tender!). Finally, the guys got bored, and when we reached the dive site "The Plateau". Ron and Greg were eager to dive again. A discussion of surface intervals, depths and dive times ensued, and we found the mooring buoy and tied off for the guys to do another dive. Once again, I was the anchor woman and boat buddy, keeping an eye on the guys' bubbles. While I'd rather be diving myself, it wasn't too much of a hardship, being out in the sunshine: I wrote, read and enjoyed myself, during that bit of quiet time while they were underwater. 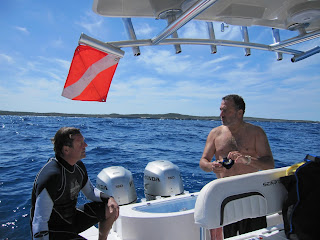 Greg and Ron comparing notes on what they saw during their dive
Once back in the harbor and in the slip, it was the usual routine of work after play: the rinse and clean-up of dive gear, and wash down of the boat. Ron and I had a light dinner of fish chowder (Ron's somewhat experimental -- but delicious -- use of the leftover of trimmings of some grouper fillets, simmered in fish stock with all sorts of veggies) before a quiet evening. We're watching the weather as usual...with an eye on the next nasty cold front that is due to arrive tomorrow evening. Hmmmmm...what a surprise!
Hugs to all, Karyn and Ron at 9:09 PM