Ok, it was another boat project day...after another somewhat bothersome night of pesky winds. (Did anyone notice I refused to mention the winds yesterday? Oh yes, they were there and obnoxious -- I was just ignoring them!) In any event, I was very pleased to see bright blue skies and few clouds this morning over coffee from the back deck! Happy happy, indeed! Ron was excited, as winds were diminished (less than 20 kts!) out of the northwest, so went out with Greg (off Karuna SS) for a bit of diving while I enjoyed a bit of puttering about, prepping the boat for Ally and Rachel's arrival tomorrow. 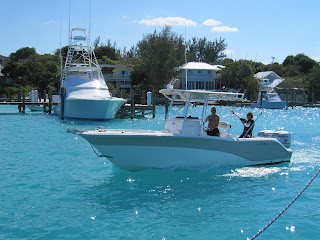 The guys heading out to dive

Noon came and went, with the boys calling in on the VHF to say that it was probably a good thing I didn't go out with them, as the seas were um....rough and confused. In fact, so rough that Ron said they weren't even going to return at full speed, but rather, they were going to bring Tingum in slow. (Hmmm! Not a normal Captain Ron attitude, so it must have been ugly!) Once they got back, Ron admitted the conditions weren't as rough as last week when he and Shawne went out, but that today's seas were slapping in from all directions, so that the boat swung all over the place in a less than pleasant fashion. Again, glad I stayed aboard Equinox!


The afternoon saw more boat projects; Greg's dionghy was having issues with a leak in one of his pontoons, so we dropped our small boat, Eclipse, in the water so an Karuna  could use that, while Ron and Greg searched out the leaky spot. Funnily enough, Ron and Greg were lucky,in that they found the hole right away...something that had been eluding Greg previously. We then pulled his inflatable onto our flybridge to address the problem, layering epoxy/patch glue over the hole, and leaving it aboard for the night to let it cure. 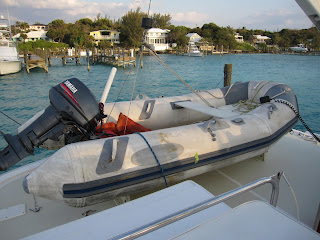 As evening fell, Shawne arrived as planned, since he'd been telling Ron about some local cuisine that was a must-have. He wanted us to share in the local barbeque ribs on Harbour Island; apparently there's a guy who prepares them every weekend so Shawne and Ron had called ahead to secure some for dinner. They brought them back to the boat, and when they returned, they came with folks in tow...a group of ladies staying here at Romora Bay who knew Shawne from the dive shop. Before we knew it, we had an impromptu dinner party on our hands! (As promised, the ribs were awesome!!) Not only that, we ended up accompanying the ladies to Sunsets for a round of late after-dinner drinks, and then...off to the infamous Gusty's and DaddyD's for late night island dancing and nightlife! I admit, I initially wasn't sure I was up for the noise and loud music, but with Ron's encouragement, I went anyway, and we all had a fun time!
Hugs to all, Karyn and Ron at 7:30 AM