The Girls are Here!

The morning today was spent in ...um... recovery mode, as we didn't get back to the boat until the wee hours last night! We danced the night away at Gusty's (love their sand floor!) and enjoyed ourselves completely! And then...rather insanely, we continued the scene at Daddy D's! The latter is a definite disco, complete with DJ and strobe lights, and was absolutely rocking out full of folks! Now, something that I find unique to Harbour Island, and something I really love about it, is that the locals and visitors alike frequent the same nightlife places. It's great! It makes one feel a part of the community, which is a definite plus -- everyone's there, having fun together! So often, resort towns have the "hot" night life places that cater only to the tourists, so it's delightful here to see the whole community in the same  dance tclubs! However, Ron has decided that Gusty's is somewhat seductively "dangerous", since it clearly leads to headaches and hangovers! The Brilanders know how to dance, and have fun!! 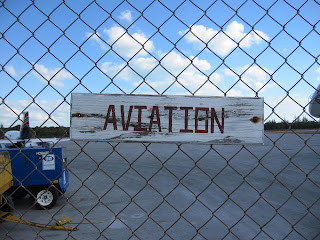 So, after a recuperative cold and windy day doing nothing much (napping was high on the agenda), the girls were due in at the airport in late afternoon! We went over to the ferry dock in Eleuthera in Tingum, so that I could grab a quick cab to the North Eleuthera airport (a mere 5-minute ride) while Ron stayed aboard and stayed out of the way of the many water taxis zipping in and out of the dock area. Of course, it's spring break season, so at the airport flights were booked and busy; apparently Nassau was having air traffic issues, as the girls' flight was delayed by a good 15 minutes before arrival. (Usually the small local airlines are very prompt, so it was odd to have it be late!) But arrive they did at long last, and it was fabulous to see Ally again and get acquainted with Rachel! I really missed having Ally at home, aboard!
The evening was a quiet one, a lovely dinner at Acquapazza, a great restaurant just down island from Romora Bay. Shawne joined us for dinner -- he graciously picked us up so we didn't have to walk in the chilly evening air (definitely cold here tonight!) -- and we all dined on Acquapazza's terrance, enjoying fabulous Mediterranean fare before returning to the boat. We were all exhausted after a long day (due to our late night last night, whereas the the girls were up very early to travel) so we all gratefully turned in early! Tomorrow's another day -- hopefully warmer!!
Hugs to all, Karyn and Ron at 9:47 PM