Fun in the Sun!

What a great day!! Finally, finally, finally...light winds from the east, calm seas with a northerly swell, blue skies and warm sunshine!! The perfect recipe for family fun on the water! We packed a picnic lunch in the cooler, double-checked the dive gear, and took Tingum out in the bright morning sunshine to run down the coast of Eleuthera for an early dive. Since Ally is flying home tomorrow, she needs a 24-hour surface interval before flying, so we knew we had to dive before 10:30 a.m. Seas were lovely, and we were delighted! 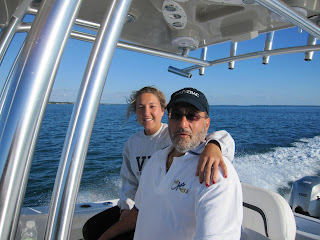 Father and daughter at the helm together 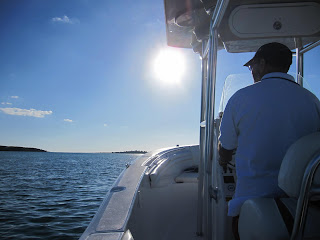 What a day!! Love the sunshine!
We dropped anchor in a large sandy bowl at a dive site that Ron found earlier during our stay, a lovely tongue and groove coral area, which ranged from 40 to 90 feet of water. Visibility was quite good as a bonus, and we happily meandered about the dive site. So much reef life is here: star coral, brain coral, staghorn and elkhorn coral, all sorts of plate and sheet coral, purple sea fans, sea whips, orange rope sponge, split pore sea rods, you name it! The reef was filled with large parrotfish, butterflyfish, small blue damselfish, fairy basslets, coneys, and wrasses, along with the occasional blue tangs flitting about, and ribbons of other schooling fish trailing across the reef tops. Gorgeous, gorgeous dive site! I saw a pair of rather large gray angelfish just before we turned to retrace our way back to the boat. 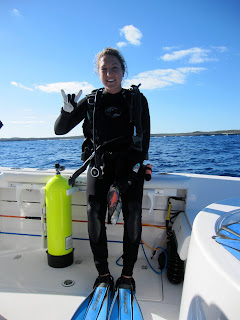 Ally geared up and ready to go! 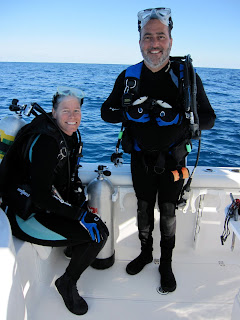 Karyn and Ron with tanks on,
ready to roll in the water
Also during the dive, we saw a couple of really large lobster holes tucked away in the reef. One shallower spot had two huge lobster inside, and another was much deeper, unfortunately at nearly 75' deep, not suitable for snorkeling and spear-fishing. But we did note the shallow spot for a return visit with a spear! After a good 40 minute dive (about all Ally and I could stand in the 72 degree water) we all surfaced and stripped off our dive gear, but Ron couldn't resist. While Ally and I tried to regain some warmth to our extremities, he kept on his wet suit, grabbed his mask and fins and went back in search of the crustacean pair we'd seen in the reef. And, after a short interval, he returned....with a monster of a lobster!! Ron's many conversations with the local fishermen had definitely paid off, as he has found the holes with the big boys inside! Ron had to bring the first one back to the boat, then go after the other lobster, since the the first one was so big. 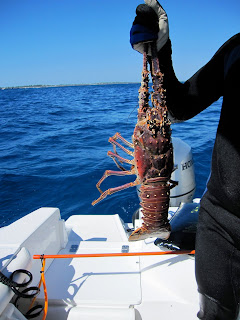 The tail is a good 10 inches alone! 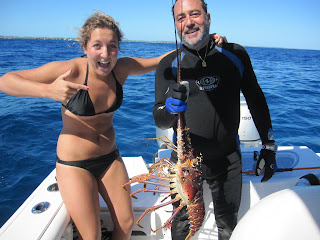 Ally couldn't believe the size of the lobster!
After the diving and Ron's lobstering, we did a bit of fishing on the way back home, dropping in a couple of lines to see if we couldn't tempt something to bite. As we fished, we discussed the lionfish we'd seen on the reef earlier. There's a big push to fish for them here in the Bahamas, as they are a non-native and invasive species, and are everywhere! They are also fabulously delicious, with a flaky white meat that rivals snapper or grouper! I had a lionfish sandwich at Sip Sip the other day that was unbelievably good, and we have since looked into how to catch and clean them. It's a bit tricky, as the lionfish have venomous dorsal spines and pectoral spines that can deliver a nasty sting, so gloves need to be worn when cleaning them. But, once the spines are removed, cleaning them is straightforward. Now every time I see one on the reef, I want to spear it! 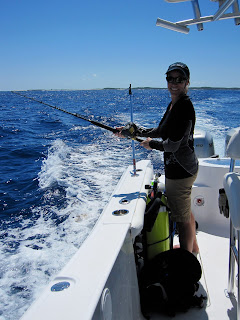 Karyn, setting out a line
Alas, the only thing we managed to do while fishing was tangle one line with the other, so no fresh fish was on the menu today! (Clearly, we're better at fishing from Equinox!) Not that it was needed, as we broiled up the two lobster tails for dinner tonight...the big one was 10 inches -- yes, I admit to measuring them on the broiling tray -- it dwarfed the other tail, which came in at a mere 8 inches! The smaller one alone fed all three of us....clearly, we will have lobster omelets or lobster salad tomorrow! But first, dishes need to be done, then it's off to Gusty's for dancing in the sand! 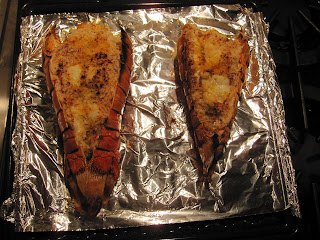 Broiled in the shell to perfection!
Hugs to all, Karyn and Ron at 8:59 PM