We logged a lot of time onboard Tingum yesterday...up early and first out to the reefs off the east side of Eleuthera, to the dive side called "The Plateau". Ron and Greg dived while I kept watch aboard the boat in the lurching swells and easterly winds. It was a good thing the girls had opted to slept in a bit, as they didn't miss anything! They would not have enjoyed the overcast skies and chilly wind! But... as the day wore on, the clouds disappeared, and soon we had blazing sunshine!
We packed a picnic lunch, picked up Greg and Karuna off their sailboat, and made our way over to Man Island, where we dropped anchor and waded to shore to a long stretch of deserted beach. There on the soft sand, we relaxed on towels and ate our fare while chatting and soaking up the warmth. The sand on Man Island is pink too, just like on Harbour Island. The color comes from something that looks like a tiny strawberry called a red foram. Beaches that are fortunate enough to have a large population of these growing offshore will wind up with tiny bits of red shell mixed in with its white sands -- which tinges the beaches pink! Ron napped in the sunshine and Greg snorkeled, we girls walked the beach, talked and looked for shells on the gorgeous stretch of shoreline. A leisurely, wonderful afternoon! 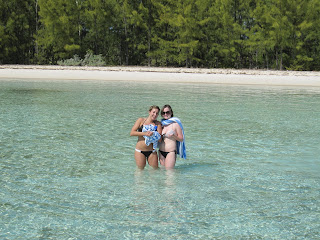 The girls, wading back to the boat from the shore of Man Island,
where we had a picnic lunch
When it got too hot to sit around, we all opted to try to do some lobstering, and took Tingum out to The Devil's Backbone -- a dangerous reef-strewn area north of Eleuthera that is not for the unwary. This stretch of shallow and jagged reef has torn the bottom off of more ships than any other reef in the Bahamas; dozens of shipwrecks litter the area. One is called the "train wreck", as literally, there's a sunken steam locomotive, along with the barge that was carrying it, on the Backbone in 1865 on its way to Cuba. SO...those without local knowledge or good charts, be ware!!


We meandered about, looking for good lobstering spots by checking the reef profile on the sounder and using the glass-bottom bucket. But, as clouds rolled back in and the weather chilled out, the optimism for getting wet again waned. SO...we simply took the boat over to Spanish Wells for a quick stop at the marine stores there in search of some replacement bulbs for the red and green running lights on Eclipse. It was to no avail, as the last box was sold yesterday, and we'd have to wait for the next shipment to arrive. We cruised about a bit more, showing the girls around islands of Charles Island, Russel Island and Royal Island, before heading back through the channels and the Backbone to Harbour Island. 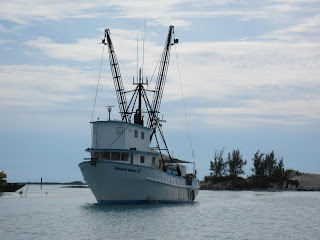 A fishing vessel coming back into Spanish Wells 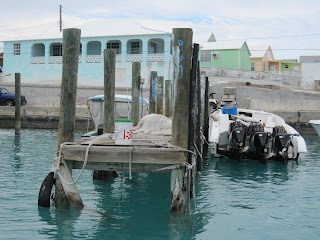 A fishing dock in Spanish Wells, loaded with nets
Once in the harbor area between Eleuthera and Harbour Island, we had company! A few of the dolphins that live here came swimming around the boat on the way back. There's a pod of about eight of them, from what we've been told. It was very cool to see, and they certainly weren't shy about cruising with us for a bit! Rachel and Ally were, of course, quite delighted, as Rachel hasn't done a lot of boating, nor had ever seen dolphins up close like this from a boat. 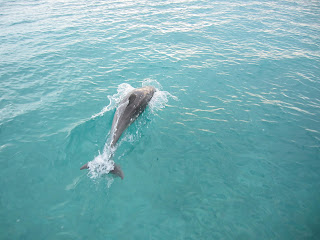 One of the dolphins off the bow of Tingum
After a full day on the water, we all were exhausted! We ended up having a quiet night aboard, having dinner and a movie (Seafood Fra Diavolo and Bottle Shock) before hosting some surprise visitors! It turns out a some friends whom Ron knows through his work at LifeBridge in Baltimore were on-island vacationing, and they had heard through another Maryland friend that we too were here. Since they were dining nearby at Acquapazzo, they stopped by afterwards, at Ron's urging. It was a treat, as we're always delighted to have company, especially friends from home! Yep, the cruising life is impromptu and spontaneous!!
Hugs to all, Karyn and Ron at 8:33 AM