Ok, now that the Olympics are over, the new sport is watching the wind indicator....yay! Now it's 28.8 knots, now its 33.1...wait, 35.7!! Do we have another gust higher? You bet!! This blasting wind is beyond repetitive: relentless, and really, really tiresome. I think we speak for the entire southern part of Florida and the Bahamas when I say “Ok, El Nino can take a break!!” (We’re actually tired of hearing about El Nino, and hearing of its effects...because we’re experiencing them! We already know!!) The cold fronts continue! 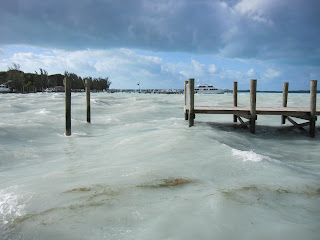 Waves from the 30 kt. winds rolling in under the
outermost marina pier -- note the sand-colored water
from all the wave action and turbulence
Ok, all crankiness aside, we’ve actually had a nice day, in spite of the winds. We went out to breakfast at Valentine's, a neighboring marina resort, as a break from the routine. Actually, that's something we’ve rarely ever do, since having coffee and breakfast aboard on the back deck is always such a lovely treat. Except for today -- we didn’t even feel like making breakfast! So, getting off the boat was the treat, and it’s a good thing we did, since when we went past our center console, which was tied up on a finger pier closer to shore, we’d found that Tingum's stern line had snapped in the wild waves washing into the shallower waters. Thankfully, we must have come by just after it happened, because no damage had occurred yet, and we were able to immediately re-secure the starboard stern. Whew! (Ron had actually gone out to check on Tingum earlier in the morning, and it was fine then -- which only illustrates the reason why you need to keep checking on things!) As it turned out, another small center console boat in the marina got caught under the pier at low tide after being tossed about in the wild waves, and was rather badly damaged. And even worse, a boat in a neighboring marina sunk right in its slip...definitely not what you like to see happen. So, being aware and alert was a necessity.
The odd thing about being off the boat during a windy spell, is that you feel the need to get back on as soon as you can, so that you can keep an eye on things! Which is what we found ourselves doing after breakfast jaunt, of course. Equinox was riding the winds well, but then again, we’d prepared for the winds with extra lines. As stated, we’ve been diligent in checking both boats, looking for line chafe, etcetera. And it's paid off, since March has certainly come in like a lion in my book -- will it go out like a lamb?? We can only hope, although I’m not sure I want to know, the way the winds have been behaving! But, then again, it’s all relative of course! I shouldn't complain, as we’re riding the winds and wave much better than the poor sailboats here at the marina, which are really getting tossed about in their slips. I’m just grateful that the girls haven’t arrived for spring break yet!!


In mid-afternoon, we got off the boat yet again to take another bike ride around island, and Ron scored a major coup in finally finding a milk crate for the back of his folding bike. He'd been looking for one for quite some time now, after seeing other boat folks biking merrily along with crates mounted on the rear racks of their bikes. In contrast to our somewhat cumbersome backpack, the crate was clearly an attractive alternative for lugging our groceries home from the market. And now, Ron has one of his own, much to his delight!


From there, we stopped in at Sip Sip for a (celebratory) drink and enjoyed another quick chance to get out of the winds. Everyone has been walking around bundled up in sweatshirts and wind-breakers today, even the locals, who were also saying they've never seen such an ugly winter. We later heard on the evening Florida news (via the sat TV) that this winter has been the "2nd coldest winter" in 60 years, or some such statistic. Ok then, it isn't just our imagination!! It's been brutal everywhere!


Ron and I tucked in for the evening, reveling in the slightly diminished winds, and enjoyed the sunset amidst the broken clouds on the horizon. We had a carnivorous dinner of lamb chops, royal rice and steamed broccoli, along with a couple of glasses of red wine. Not anything overly exciting, but...just the stuff that dreams are made of: being aboard our own boat, dining, in a beautiful Bahamian location! We'll sleep well tonight!
Hugs to all, Karyn and Ron at 7:24 PM