Another Day in Paradise

...and Bermuda is it. Ally and Taylor hung out with Alexis on the beach this morning, so Ron and I sneaked in a dive while they were gone. It was actually the best visibility that we'd encountered here, so we were really happy, and the random reef area where we dove had some amazing caverns and swim-throughs. We found some amazingly beautiful Atlantic Deer Cowrie shells on the sea floor near the base of the reefs, which we collected, and saw one of the largest Blue Angelfish I've ever seen. A very nice dive; with the better water clarity, the reefs are even more impressive and vibrant! 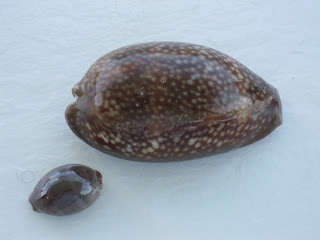 After the dive we came around to the north of St. David's Island, through Town Cut into St. George's for dinghy fuel on the way back to the boat. Fuel here is expensive, mostly because of the government tax, and it's almost $1.50/liter. But then again, everything here is rather expensive, simply because it all has to be imported. Although liquor and wine prices seem reasonable, but I don't think there's a tax on that! :) While sunny, the wind had picked up again, so we girls spent the afternoon relaxing aboard, while Ron ran a couple of errands on the motor scooter: returning a wrong part to PW Marine, stopping in at Harrington Hundreds -the nearest market- for some needed groceries. In the early evening we all rode the motorbikes over to Audrey & Bert's home, Boat House, on Harrington Sound for dinner. We had a lovely time on their terrace overlooking the Sound while the girls swam, snorkeled and did a little scuba-diving, before enjoying a lovely barbeque dinner. The sunsets here are unbelievably beautiful! 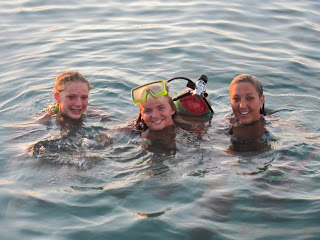 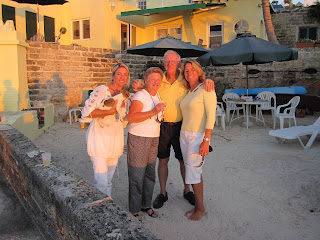 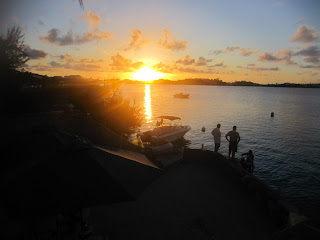 Warren and Ron at the edge of Harrington Sound
silhouetted by the sunset
Hugs to all, Karyn and Ron at 2:14 AM