Bicycling and Dinghy cruise to Hamilton 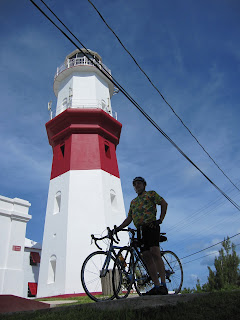 Ron at the base of St. David's Lighthouse

After a gorgeous night under the stars on deck, Ron and I left the girls still sleeping to take advantage of a gorgeous, sunny-but-windy morning for another bicycle tour of Bermuda,. This time we rode east, around Castle Harbor up to St. David's Lighthouse, a quick 22-mile jaunt. The roads here are just so beautiful, with thick hedges of oleander and hibiscus, stone walls, limestone ledges, and ocean vistas that take one's breath away. I was trying to figure out a way to get a photo of Ron bicycling ahead of me as we were going through these gorgeous areas, but....not wanting to juggle the camera at high speeds and try to steer at the same time, I opted not to do it. Still, the photos would have been incredible... 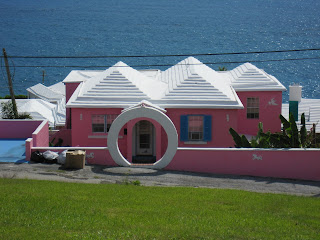 A house just below St. David's lighthouse looking
south to the Atlantic
After the bicycle ride we returned to find the girls awake and ready to swim, but Ron convinced us all to take the dinghy the entire way around the north side of the island to Hamilton, a good 8-10 mile dinghy ride, one way. He wanted to have lunch at the Hog Penny, one of the more celebrated Bermudian/English pubs in town, to sample the Bermuda Fish Chowder. We also needed to run a few errands (bicycle store to buy a new tire for Ron, grocery marketing at Miles Market for vegetable provisions), so off we set. We made our way through Bermuda's North Lagoon, keeping a lookout for any of the shallow - and dangerous - patch reefs that dot the lagoon. There are 35,000 of them in the North Lagoon alone, according to the Bermuda Reef Ecosystem Assessment and Mapping Programme (BREAM), which recently created a detailed map of the coral reefs and ecosystems surrounding Bermuda. BREAM is a non-profit organization, part of the Biodiversity Project at the Bermuda Zoological Society, and has a web blog showing their most recent efforts and research activities. One website page shows their mapping efforts, for those that are interested: http://bermudabream.blogspot.com/2008/05/mapping-bermudas-coral-reefs.html. It's really fascinating!

Once around Spanish Point we went south and made our way into Hamilton Harbor. We docked the dinghy at the Royal Bermuda Yacht Club after fueling up, then walked along Front Street to the Hog Penny. The fish chowder was definitely worth the effort! Entrees included shepherd's pie, chicken pot pie, fish 'n' chips, and caesar salad with shrimp. All were delicious! 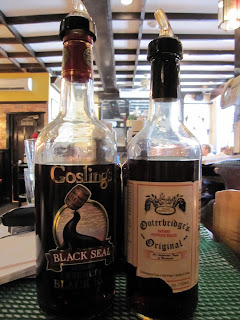 The secret ingredients for true Bermuda Fish
Chowder -- and must be added tableside!