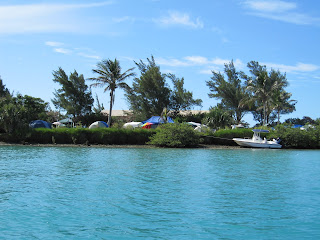 Just a few of the tents pitched along Ferry Reach for Cup Match
Ron and I went in search of a new dive spot, and based upon the prevailing winds, thought that the eastern side of the island would be calmer. So we checked our little Marine Resources guide, which listed Mills Breaker as a dive site with mooring ball, about 1.5 miles off the eastern end of Bermuda. We went out through Ferry Cut, and again, were amazed at the number of tents pitched along the Reach for Cup Match! Everyone camps out, swims, boats, celebrates. Very fun!

We stopped in St.George's to fuel up again ($1.47/liter) before going out Town Cut and heading east....we found the Mills Breaker mooring with little trouble, although the site was so shallow - 17' - that we could have snorkeled instead of diving. Disappointing, at best! We reconnoitered the area, but again, the surrounding reef was so shallow that it wasn't worth using the air fill. SO....off we went, pausing momentarily to watch the Norwegian Majesty squeeze out Town Cut on her way back to Baltimore. These large cruise ships take every bit of space in the channel....tight fit! We continued our voyage around St. David's Island and along the southeastern side to try to find the wreck of the Kate, which we hadn't dived yet. A long slog into the swells, we finally found it off of Tucker's Point Beach Club....but again, very shallow!! Argh. We finally went back to the patch of reef that we dove the very first day, in about 60' of water just outside the Castle Roads cut. Despite the dismal visibility (again!) we found a very nice swim-through and saw a couple large grouper and a good-sized hogfish that we approached quite closely. We also came across a huge wooden treetrunk-like thing mostly buried deeply in the sand...possibly part of an old mast?? Or, not. But it certainly was large, and unusual. We got back to find an e-mail invitation to join Shindig at the back side of Cambridge Beaches, on the west end of Bermuda....darn!! It would have been fun to cruise over there, but I didn't get the e-mail until we'd been out most of the day diving, and it was too late to run over in the dinghy and join them.
We didn't do a whole lot in the late afternoon beyond discussing what we need to do to prepare for our journey back to the States, as that is weighing on us a bit. Rather sad!! We need to do another oil change on the 20Kw, break down and stow the flybridge bimini, get all the clearance paperwork done for duty-free fueling, batten down the saloon and stow all fly-away items....but those will be done next week prior to departure. SO, we relaxed a bit today; Ally went over to Castle Roads to jetski for a bit with some of the local girls, then over to The Clearing to hop aboard t/t Justified for a late lunch at Rusticos in Flatt's. Ron napped a bit, and I prepped some seafood Fra Diavolo for dinner. Probably the quietest day we've had since we got here!! We're missing Warren, Christine and the girls, and with our own departure looming, we're all a bit melancholy!