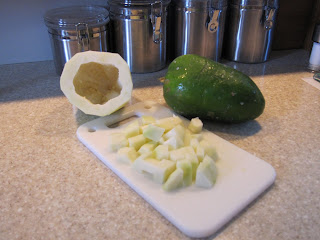 Bermuda pawpaw getting prepped for dinner

One of the things we like to do when we cruise is find out the local delicacies and unique cuisine of the places we visit, and sample everything. Bermuda is no exception, it has its regional dishes like Bermuda Fish Chowder, and its various drink specialties (which we have noted before, the Rum Swizzle and the Dark 'n' Stormy). What we discovered through talking with folks here though, is that Bermuda has lots of "pawpaw" trees, often growing wild and its fruit is used for cooking. We were told that "when it's green, it's a vegetable, when it's orange, it's a fruit." We were mystified by this; I'd heard of pawpaw, (I think it actually grows wild in Maryland) but had never seen one. Nor had we ever heard this information about the fruit. When it's green it can be added to meat dishes, and it will tenderize the meat beautifully, or be made into a casserole. When it's ripe and orange, it makes a delicious fruit dessert.

Mysteriously, two pawpaws were delivered to the boat a couple of days ago -- left aboard while we were out swimming at Castle Roads. (And we thank the unseen donors for the generosity.) Large and green, I had NO idea how to use them, and they were not like anything I had ever seen before. And, after a brief internet search, I was ever more mystified, since all pawpaw references and recipes were for a fruit. Nothing about using pawpaw when green as a vegetable -- the photos of pawpaw didn't look like the green orbs I had onboard, either.

THEN...I discovered that the Bermuda pawpaw is actually papaya!! True pawpaw are totally different species, and yes indeed, we had two huge papaya in the galley. Green papaya fruit is often used in stews and curries in Bermuda, and indeed, the raw fruit is rich in an enzyme called papain, which is useful in tenderizing meat and other proteins. I found a recipe for Bermuda Pawpaw Montespan, and made a vegetarian version as a side dish for dinner last night. Ally loved it, and in fact, we all thought it was quite good. Very cool addition to my cruising recipe file!

Cook pawpaws until tender. Mash and put a layer into a greased baking dish. Cover with a thin layer of tomatoes, then meat and onion, then cheese. Repeat these layers until all ingredients have been used. Finish with pawpaw, sprinkle with cheese. Cover with bread crumbs. Bake at 350 degrees for 40 minutes.