Bicycling to the Dockyard & Back

We started in the east at Tucker's Town, then rode
west all the way around to the Royal Naval Dockyard
before returning along the same south shore route. 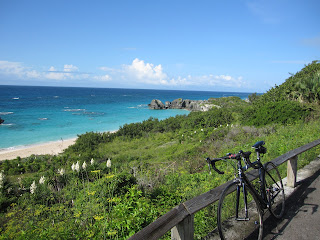 The view of Warwick Long Bay from the overlook

Thursday morning found Ron and Karyn up well before the girls, so decided to take a long "pedal-bike" ride (which is what they call bicycles here, versus the motor scooter "bikes"). We meandered along Bermuda's stunning southern shore road and then followed the island as it curves to the north, ending up at the Naval Dockyard. It was a good tour of continually rolling hills, narrow roads hemmed in by limestone rock walls, amazing palms of all descriptions, flowering bushes of oleander, hibiscus, jasmine, sea lavender and flame trees, white-roofed homes tucked in along stunning seaside scenery. Also, at times, some very close buses, cars, trucks and scooters, as the roads are quite narrow and winding! In general though, folks are very courteous to bicyclists, so we had a great ride. I made Ron buy more water and some sun block when we got to the Dockyard (and paid cruise ship prices for the the lotion -- ouch!!) because the sun was so strong, even in the morning. It was 21 miles to the Dockyard from where we started in Tucker's Town to the east, so it was a good 3 hour bike ride to make the 42-mile round trip. There were a couple of surprisingly steep hills on the return leg that were a bit challenging to our tired legs, but we prevailed! The swim after the ride was heavenly!! 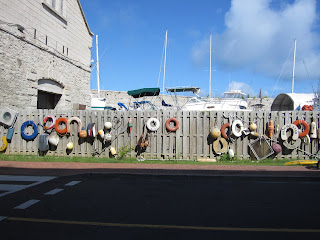 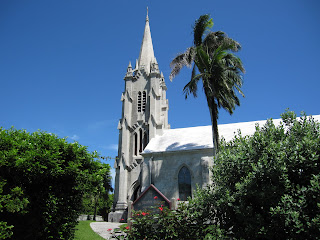